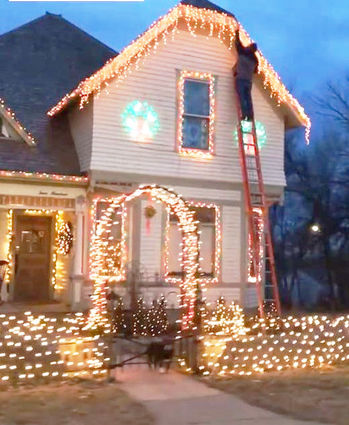 After powerful wind gusts on Saturday morning, Jeff Finley had to do some touch ups on his house, which was still in second place in the Deck the Halls Challenge.

It may not have been the Great Light Fight, but the MSU-Northern (MSUN) Alumni Foundation wrapped up its first Deck the Halls Challenge this past Monday when voting closed. Twelve houses in Havre and the Jeff and Lynette Finley residence in Chinook competed for the best holiday light display. In order to vote, however, admirers had to put their money behind their strong opinions. The winning house was the one that brought in the most donations. Monday morning, after an anonymous donor contributed $1,000 to House Five, it looked like that would be the winning house.

According to Shantel Cro...