Harlem Girls, Boys Basketball Will Again Be Strong Contenders in the Northern B 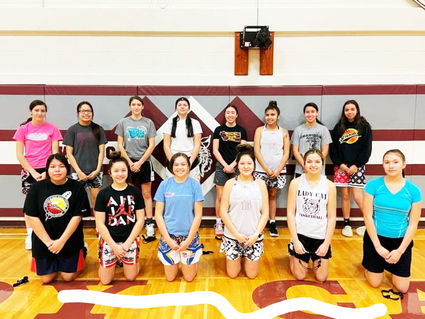 Student athletes have been in the gym and on the mat since December 7, in preparation for the 2020-21 winter sports season. With practices pushed back three weeks by the Montana High School Association (MHSA) due to Covid-19 it's no surprise these athletes are anxious to get the season underway.

The delay essentially meant spending an entire month practicing against each other and it should come as no surprise that the anticipation for the first action of the new season is at an all time high.

The delay pushed the day for allowable competition to take place until after the new year and the Harlem basketball programs will compete January 2. The Wildcat Wrestling team will see its first action on Thursday, January 7.

The Lady Cat basketball program has a familiar face at the helm. Head Coach, Laramie Schwenke returns to the sideline and will look to keep the program rolling at a high level. Schwenke was instrumental in beginning the rebuilding process and after a few years away from the bench, she is set to take over the reigns once again.

The Lady Cats have made back-to-back trips to the Class B State Tournament and will look to extend that streak to three this season. Seniors Gabi Bell and Alaynee Hawley return this winter to lead the team and will be joined by All-State, All-Conference junior Taya Trottier. Trottier has proven herself to be one of the top players in the state and will again be instrumental in the Lady Cats success.

Also back this season are juniors, Chloe Messerly, Vanise Little, Alexus Cochran, Mia Wing and CeCe Helgeson and all will be counted on to contribute on the court. Sophomore this year include, Crysie Johnson, Keonna Medicine Bear, LaKayla Doney, Tamira Cliff, Harmony Bigby and Ma'Lea Moore. Freshman getting their first taste of high school basketball are Tova Anderson, Savanna Jones and Alaura Hawley.

Trottier, Messerly, Little, Bell and Alaynee Hawley all bring extensive varsity experience to the lineup and are savvy veterans who have all experienced success in the post season.

While the team may have a solid core of experienced veterans, Schwenke considers her team to be up and coming, "We will be a fairly young and new team. We graduated quite a bit of experience and leadership last year, but we return some too, which we will be building around as we continue to build upon the foundation of the Lady Cats program that has been set."

The delayed start to the season hasn't dampened the energy level of her team, "The intensity has been pretty consistent thus far. It's tough to practice, practice, practice and not have a game, but we've also been learning to embrace it and not take for granted each day we get to be with each other, practice, and compete together," said Schwenke. "The kids are very much looking forward to our first game!"

Schwenkes approach to practice early on focused on building strength, "The first two weeks we were heavy on conditioning/drilling, but we've transitioned into X's and O's more in the last week, while still combining conditioning into our drills and throughout practice."

The Lady Cats have developed a reputation for being very active on defense and explosive on offense and that shouldn't change this year, "My expectation is for us to bring good energy, be prepared to work hard, and compete each day in practice and games. There has been a foundation of a program built for Lady Cats basketball and I expect us to continue building on the past success to create our own," concluded Schwenke. Brandon Trottier will be the Assistant Coach for the Lady Cats this season.

The Wildcat boys basketball team turned a corner last season finishing one win short of a state tournament birth at 18-4. Head coach Geno LeValdo is back at the helm of the Wildcat program for the third year.

The Wildcats have turned the program back into winners in just two years and look to continue that success this season. After going 4-18 in LeValdo's first year the team has gained confidence and experience along the way.

The Wildcats return seniors, Trent Main, Jehton Longfox, Cassuiss Johnson to the program this season and welcome senior Andrew Rasmussen to the team after wrestling for the Wildcats the past three years.

Juniors All-Conference standout R.J. Ramone, Tyler Cichosz, Daniel Lawrence, Teagan LeValdo, Amari Stanly, Deshon Shambo and Cody Wiegan. This group of juniors have played huge minutes for the program since their freshman season and will look to be solid leaders on the court for the Wildcats again this year.

The Wildcats bring back a solid group of sophomores including, Devon Doney, Mckale Messerly, Marley Stewart and Moses Lawrence. Freshman getting their first taste of high school basketball are Thunder Bigby and Tommy Champayne.

LeValdo likes what he has seen from his team thus far, "the first couple weeks went great, they got right into it. The thing I see is that they are more focused and excited, they have been waiting for this season to start since the beginning of April."

Despite a huge loss to graduation, LeValdo likes how his team has looked to fill in the departure, "What stood out a lot to me, was missing the states leading scorer (Brad Cichosz) of course. His work ethic, conditioning and words he left behind for these younger athletes to pick up on and that nothing is given but everything is earned, has had a big impact on the program," said LeValdo.

Those lessons past on have the coaching staff ready for the new season to begin, "We are excited for the season. We missed state by one game last year, but we earned a lot of respect. The Harlem boys haven't made a good run in several years and especially going 4-18 the first year and then 18-4 this past season shows the boys are hungry."

It isn't just the veterans that have been contributing in practice, "We have a few freshman who got right into the conditioning and drills with us," said LeValdo. "My expectations for this year is for us to be more aggressive and have fun, and be safe! But I want to wish every team in the State to have fun, play hard and be safe," concluded LeValdo. Joining LeValdo on the bench this season will be Assistant Coach Ben Carrywater.

The Wildcats and Lady Cats will conclude their season at home on Saturday, February 20 against the Poplar Indians and will recognize their seniors in between varsity games. This season the boys varsity will play first with the girls to follow with the exception of the road game in Chinook on January 5.

The Wildcat wrestling team is under the direction of first year Head Coach Jon Baker and Assistant Coach William Blackcrow.

The Wildcats will hit the mat for their first competitive action on Thursday, January 7 at the Chester Invitational. They will follow with meets in Forsyth, January 8, Glasgow, January 16, Chinook, January 22, Harlem, January 23, Wolf Point, January 28, Malta January 29 and Senior Night in Harlem February 5

The B/C Wrestling landscape has changed considerably and will no longer consist of four divisions. This year the B/C wrestling ranks are scheduled to be divided into two Super Divisions, one from the east and one from the west. There was speculation to stay four divisions this year due to all of the Covid precautions but as of press time that decision has yet to made.

The delay to the start of the season has allowed the wrestling post season to be moved back as well. As it stands The Eastern C Divisional is set to take place in Colstrip February 26-27 with the State B/C Tournament taking place the following week at a yet to be determined location.