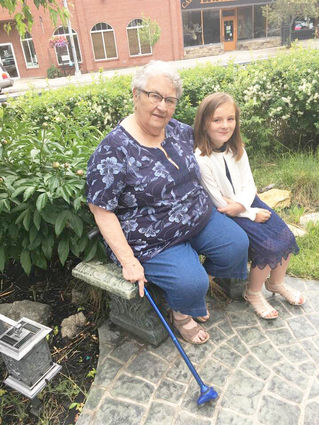 Our beloved Mother, Mama, and Great Mama, Nancy Ann Sudan, passed away unexpectedly December 20, 2020 at the Sweet Home in Chinook. She spent her last days surrounded by friendly faces, telling her daughter how happy she was with the food and care, and visiting her great grandkids who came to sing her Christmas Carols.

Nancy was born to Dale and Lola Richie in Villisca, Iowa August 28, 1940 at her grandparent's farm. Playing with her cousins was a fond memory of hers. In September of 1951 they moved to Hogeland, Montana. She said that moving to Montana was the best decision that her parents made. They moved to Turner in 1952 and then onto Rudyard in 1953.

In 1958 Nancy graduated from Rudyard High School. Two weeks later she married Eugene Sudan and moved to Hogeland where they welcomed their three children Gary, Joyce, and Elaine. In 1967 they started working for Bob and Don Rasmussen. She cooked many meals for the hired hands, grew a huge garden, butchered around 200 chickens and enjoyed their annual camping trip each summer. She was very involved in the community, especially through the Hogeland Lutheran Church. They moved to Turner in 1978. In the summer of 1979, they worked for Wolery Custom Cutting where she helped feed the harvest crew. From 1981 to 1985, Eugene returned to his parent's farm while Nancy worked for the Federal Crop Insurance. She worked as a relief postmaster in Hogeland and eventually travelled all over Montana taking the postal exams. She was hired in Wolf Point in 1987 and then became Postmaster in Jordan, a place that was always near and dear to her heart, in 1990. While in Jordan, she became a licensed Pastoral Candidate, gave weekly church services, performed a few funerals and even a wedding. She talked often of the Montana Freeman Standoff where she housed members of the media and the impact it had on her job at the post office. In October of 1999 Nancy became postmaster in Chester. She retired on May 31, 2009, moving to Hingham and settling in Havre.

Nancy's family was the pride and joy of her life. She personally embroidered quilts for each of her kids, grandkids, and great grandkids. The legacy of Nancy's infectious laugh, beautiful smile, and making friends wherever she went will be cherished forever.

A family service will be held at a later date.