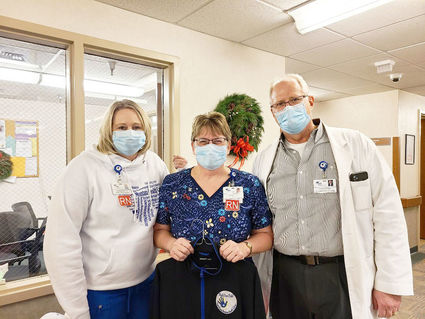 Behind her mask, Leanne Brewer is all smiles after learning that she received the C.A.R.E. Award from Northern Montana Health Care's High Five Club. Brewer is flanked by Sarah Spangler, RN, Director of the Medical/Surgical Nursing Team and Eric Koch, RN, Vice President of Patient Care Services.

In their bi-monthly ritual of presenting C.A.R.E. Awards, officials from Northern Montana Health Care (NMHC) announced their most recent recipient. Registered Nurse Leanne (Standiford) Brewer, a member of the Medical/Surgical Nursing Team at Northern Montana Hospital, received the honor during the third week of December.

Brewer, who is a resident of Chinook, has worked at the hospital since February of 2017. She was nominated for this honor by her co-workers, who complimented her professionalism and caring spirit.

"I had just sat down for lunch in the break room when one of the Case Manager...