Maiden flight of Dick Edgington's homebuilt plane back on hold 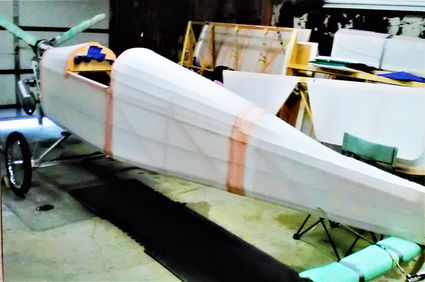 This is a photo of the RagWing4 fuselage in a Great Falls shop without tail or wings. George and Shirley Wermling attached the outer skin fabric to the wooden frame. The Wermlings bought the uncompleted plane in 2018. Dick Edgington, of Chinook, started the project in 2004 but stopped working on it about 2012 when his eyesight began to fail. Dick died in 2016.

Another glitch has halted the runup to the maiden flight of Dick Edgington's homebuilt RagWing4 single engine plane. Many locals recall the plane that Edgington, a longtime resident of Chinook, built from scratch in his house on Pennsylvania Street. According to Dick's son, Danny Lee, "Dad retired from the county road department in 2004 and started acquiring parts and building the plane. A few years later, after his eyesight failed, he had to abandon the project." Dick Edgington died in 2016.

In 2018 I learned that various components, parts and some completed sections of the plane were stil...