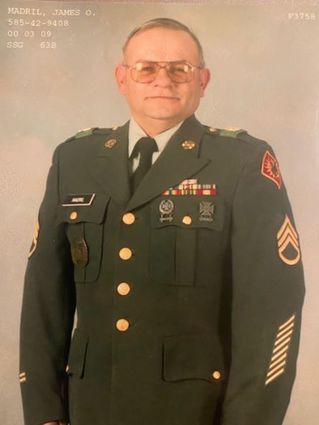 Santiago "James" Orlando Madril was born 9/9/1952 to Jimmie & Eleanor Madril in Duran New Mexico. James O was raised in both Duran and Roswell New Mexico and was one of 9 children.

One of James's proudest accomplishments outside his family was serving for the United States Military in both the Army and National Guards for a total of 34 years retiring in 2007. Throughout his years of service James developed some of his most cherished friendships that lasted his whole career and beyond. This is where he got his nick name "Taco" which he would proudly answer by. You could always see him sporting an American flag or displaying how proud he was to be a veteran.

On September 7, 1973 James O met the love of his life Jennifer Jean in Fort Sill, Oklahoma where James was stationed and Jeanie was going to school the two met and were inseparable from that moment on. The love and bond these two shared showed no bounds and will last a life time. It was important they showed each other this by a kiss good morning and a kiss good night as well as a kiss hello and a kiss goodbye. To this union they had 5 children all of which James O was extremely proud of. He was even more proud to boast about his 19 grandchildren all of which he enjoyed his special bonds with. James O and Jennifer Jean spent 47 loving years together.

James O was one of a kind! His infectious personality and smile would brighten any room and had an impact on all who knew him. He loved to make anyone smile even a stranger on the street by either cracking a joke or a simple hello. His biggest enjoyment in his later years was getting on the back of his Harley. He would find any excuse to ride his bike whether it was to check the mail, visit family, or go to a doctors appointment. He was forever giving his wife more gray hairs. He loved the freedom of the open road while on his bike.

He was preceded in death by both of his parents; his mother in law Velma Flansburg; his brother Tony Madril and sister Inez Tafoya; brother in laws Danny Flansburg, J.C. Tafoya, Con Zamora, and Joe Romero; nephews Louie and Gilbert Romero; son in law Blaine Wombold; and his precious grandson Hank Madril

James O is survived by his loving wife Jennifer Jean of Chinook, MT. Sons Santiago Madril and Willie(Val) Madril both of Havre Mt. Daughters Rita(Rusty) Golie; Eleanor(Damon)Bricker and Theresa Madril all of Havre Mt. Siblings Ambrose Madril; Arnold Madril; Lou Madril; Mary Zamora; Eufemia Romero; and Eva Aargon many nieces and nephews and of course his 19 grandchildren to which he was ever so proud of.

Even though he was taken from us far too soon we will all cherish the memories of James O Madril!