COVID-19 has changed how we spend leisure time 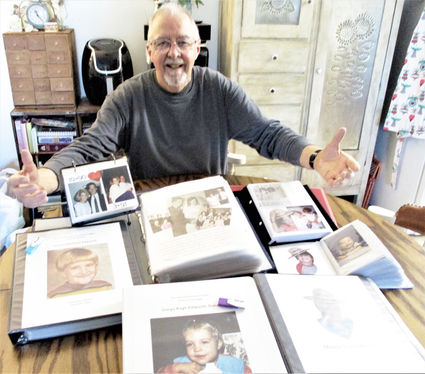 "Journal" writer Steve Edwards shows the final products of a three week effort he and wife, Sherry, completed to reduce and organize 55 years of photos and 35mm slides. Each album is a personalized pictorial history for their grown kids and older grandkids. They agreed the best part of the project was "a walk down memory lane as we looked through the 55 years of pictures and reflected on our life as a couple and our extended family."

A year-long series of directives, rules and, in some cases shutdowns and cessation of public activities, resulted from the need to deal with the COVID-19 pandemic. Most all of us have been affected in some way from schools and/or churches closing, activities being cancelled and, in some cases, having to work from home. While changes in our rural areas are less dramatic than in bigger cities and towns rural residents have made some alterations in how we spend our free time.

Nearly a full year since the pandemic started I was curious to see how leisure time activities have been affected. News stories reported the uptick in people buying RV's and campers in order to travel and keep socially distant. The cruise industry was severely curtailed after several ill-fated trips with COVID outbreaks. Movie theatres, bars and restaurants had to curtail hours of operation and in some cases close. But folks adapted to the changes and new ways to recreate and spend one's time blossomed. Here's some of what I learned about how we've changed the way we utilize our free time.

Some local and national trends

My wife asked a group of friends during a Zoom meeting (a new technology affecting how we meet) what they've been doing during the pandemic. Responses included painting inside the house, doing a housecleaning spree, reading more books, doing more walking to get out of the house and eating more foods not good for them "because the snacks were handy." One interesting trend was "shopping more at local businesses and avoiding big box stores." Some local merchants verified their sales did increase during certain stages of the pandemic.

Media stories featured ways people were recreating in new ways. Lists of "ways to fill your free time" began to pop up in all sorts of formats from Facebook posts to newspapers. Lists of suggested activities ranged from "learn a new skill" or foreign language" to "organize your photos." Some business models provided expanded ways to deal with the challenges of social distancing and keeping customers safe.

One major trend was an increased availability of exercise options. Virtual workouts and connected fitness devices (like the Peloton bicycle and the Mirror seen regularly in TV commercials) gained in popularity. Connected devices for exercising had only a 2.9% share of overall revenue in the fitness industry in 2015 but now garner about 8%. Some of the more ''digital" devices require a fairly hefty initial investment ($1500-$2000). To get all the bells and whistles (body system monitoring, feedback from live online instructors, digital records of your ongoing performance, etc.) an additional monthly fee is required.

At-home virtual workouts do have their advantages. First, social distancing and masking are no longer issues. Travel to a facility, often a big deterrent in busy urban centers,

is not required and the more sophisticated services 'connect' customers with other users doing similar exercises. Once past the initial investment, most fees for connected devices are cheaper than the monthly cost of a membership at a health club (and many clubs closed for health reasons). Finally, users who switched to at-home exercising say they work out more regularly because of the easy access and ability to control when they exercise.

Nationally, the pandemic affected other trends. A consumer study found that 57% of homeowners completed some sort of a home improvement project between March and May of 2020. More time at home made owners aware of things that needed to be upgraded or changed.

Two-thirds in the survey said the time they sheltered-in-place created more available time to complete projects.

My wife and I heeded a suggestion we saw on several lists of "things to do" with our stay-at-home time. We decided to sort, reduce and put into more user-friendly form the fifty-five years of photo albums, loose photos and 35mm slides we had accumulated. Four plastic storage totes (about the size of a medium-sized ice chest cooler) held roughly 5000 photos in 20+ albums, each album a different style and format, and 1300 35mm slides.

Our stated goal was: Put the photos in some meaningful way that our two grown kids and grandkids can enjoy looking at photos of our and their history. One thing we realized was that since the advent of digital photos our grown kids and their kids don't sit down and "look at photos" anymore. We browsed several websites to learn how to manage photos/slides and create albums. There are professionals who will do all the work for you from culling photos to making albums. We wanted albums that would allow future adding or removing and decided we could do the project using materials easily available. 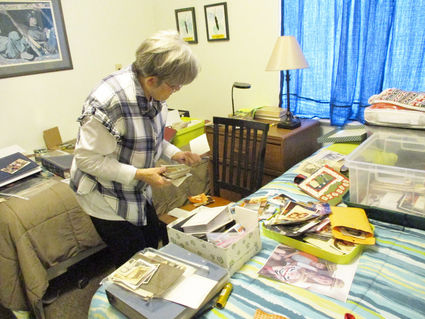 Sherry Edwards is shown at the start of a project to organize 5000 photos, 20+ photo albums and about 1300 35mm slides. She and husband/ "Journal" writer Steve decided to use some sheltering time from COVID to deal with 55 years of family photos and slides. The biggest challenge was throwing away the first photo. Once that initial barrier was overcome the project gained momentum.

Once we removed all the photos from the albums my wife began to organize the photos in chronological order for each of our two kids and the three oldest grandkids (the younger grandkids are totally digital, no real photos of them exist to put in albums). To make photos from slides for the albums I jury-rigged a homemade system using a handheld camera. Most photos of the slides came out okay, some were a little out of focus-collateral damage. It was an easy, economical and immediate way to get photos. For displaying the photos we used clear plastic page protectors in three ring notebooks.

The final product was eight photo albums. We used about 1100 photos of those we had and kept 150 images from the 35mm slides. The biggest obstacle was getting rid of photos. Once we threw away the first few it became easier and easier. Long story short, I think in the albums we captured a visual history of me and my wife as a couple and the stories of our kids and grandkids in pictures. Best part of the project, it was a real walk down memory lane for me and my wife as we reflected on fifty-five years of marriage, moves and kids through photos. Well worth the three weeks we spent doing the project.

Next? Maybe we tackle organizing the file drawer full of "art and letters" from the grandkids. That would be another walk down memory lane.