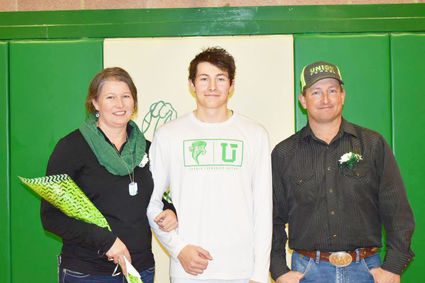 The Turner Tornado center court honored six seniors recently. These Seniors will be the 2020-2021 graduating class at Turner HIgh School. Although there wasn't quite the crowd that would usually come to honor the Seniors, due to Covid restrictions, those who were present and those watching on the NFHS website, enjoyed honoring them just the same. Congratulations to these six students and best wishes as they complete the remainder of their senior year and onto the next chapter of their life. You have brought a ray of sunshine to everyone in and around this community and Turner Public School throughout the years.

CONNOR VANVALKENBURG. Connor is the son of Wendy and Kevin Van Valkenburg. Connor plans to stay on the farm with his family after graduation. He would like to thank his brothers, Aaron and Bret, for always being there for him and being the best brothers a guy could have! Connor's words of wisdom are. "Listen to me with more than just your ears to hear what I have to say."

BRANDY CALVERT. Brandy Calvert was escorted by her parents Brian and Karensa Calvert. Brandy has been involved in volleyball, basketball, and track. She is a member of the National Honor Society and Pep Club. Her future plans are attending basic training for the National Guard this summer and attending AIT in the fall. Then she will attend college afterwards. She would like to thank her parents, grandparents, classmates, and school staff for everything during high school. Brandy's words of wisdom are,, "The best way to predict the future is to create it."

SHANE KIMMEL. Shane Kimmel was escorted by his parents, PJ and Tricia Kimmel. He has been involved in basketball, track, student council, and pep club. His future plans are to attend Northern Arizona University and major in construction management., He would like to thank his parents, Mr. Holland, Jon and Shelly Harmon, and Jack Harmon for making his high school years more interesting. Shane's word's of wisdom are, "God put the greatest things in life on the other side of fear."

SHYAN KRASS. Shyan Krass was escorted to center court by her parents, Lorin and Jill Krass. In high school, Shyan was involved in basketball, track, volleyball, honor society, student council, and pep club. Shyan's future plans are to play college basketball and continue her education. She would like to thank her parents for all the opportunities they have given her, and her coaches, friends, and community for the support along the way. Her words of wisdom are, "Nobody is ever going to be happy with what you do or achieve. Do your own thing, and show everyone what you are capable of. Don't let people get to you because you are the only one deciding your success." 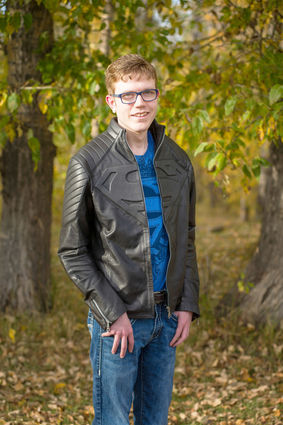 AUSTIN WELSH. Austin Welsh was escorted by his parents Kurt and Jullie Welsh. He has been involved in basketball, track, and football in high school. His future plans include attending Northwest College in Powell, WY working for a degree in farm and ranch management. He would like to thank his brother Dylan for coaching basketball the past few years. He would also like to thank the Athletic Director, Denita Humphreys for everything she has done for the team, both in and behind the scene. He would like to thank his parents for always pushing him to succeed in everything. His words of wisdom are, "Make sure your worst enemy doesn't live between your two ears."

BROOKE REED. Brooke Reed was escorted to center court by her parents, Steve and Anita Reed. During high school, Brooke has been involved in basketball, volleyball, honor society, pep club, HOBY, DC Club, 4-H, and Youth Group. Her future plans are to attend MSU-Northern and pursue a degree in Nursing. She would like to thank family and friends for supporting her unconditionally and being blessed to have grown up in such a great community. Brooke's words of wisdom are, "Do your little bit of good where you are. It's those little bits of good put together that overwhelm the world."