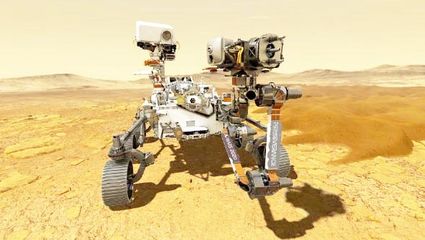 On February 18, NASA's Perseverance rover will complete its journey of nearly 300 million miles to finally land on the Red Planet. After performing a complex maneuver called entry, descent, and landing (EDL), Perseverance will attempt to rest on the surface of Mars.

One organization hosting the landing is NASA's Jet Propulsion Laboratory (JPL), the location of the rover's construction in southern California. As part of their education partnership with the California Institute of Technology, the JPL brings programming and information to the public.

Launched on July 30, 2020, NASA's Mission, Mars 2020 hopes to hit Jezero Crater, which is the chosen landing site for the Perseverance rover. According to JPL, this crater is "a 28-mile-wide basin located in the Martian northern hemisphere. Sometime around 3.5 billion years ago, a river there flowed into a body of water about the size of Lake Tahoe, depositing sediments in a fan shape known as a delta. The Perseverance science team believes this ancient river delta and lake deposits could have collected and preserved organic molecules and other potential signs of microbial life." Exploration will begin amidst these rich deposits.

To hear more about this exciting mission and what to expect on landing day, interested individuals are invited to join one of the many livestream presentations available online.

In anticipation of the landing and in countdown mode, the JPL education team has hosted a question-and-answer webinar for high school students on February 16 at 10:15 a.m. and another for middle school students at 12:30 p.m.

Today, their livestream for elementary students occurs at 10:30 a.m. on February 17. During this presentation, which requires registration, NASA engineering and education experts will answer questions about the Perseverance Mars rover. A representative from a classroom, educational organization, or household can register to participate.

Furthermore, the landing day broadcast with mission commentary can be viewed on NASA TV and the agency's website (https://www.nasa.gov/nasalive). NASA provides a full programming schedule at that site.

Another organization that will provide access is Exploratorium.edu. Located in San Francisco and the brainchild of Frank Oppenheimer, Exploratorium is a public learning laboratory exploring the world through science, art, and human perception. Its website carries this message: "Here is being created the Exploratorium, a community museum dedicated to awareness."

On Thursday, February 18, at 1:00 Mountain Standard Time, Exploratorium will be hosting coverage with a free online event. A person can join the EDL from the Exploratorium website or via Facebook or Youtube.

Perseverance won't be the first rover on Mars. The Curiosity rover landed there in 2012. However, new advancements in technology, as well as some of Curiosity's discoveries about the planet's geology and environment, has set the stage for Perseverance. The Mars 2020/Perseverance rover is designed to better understand the geology of Mars and to seek signs of ancient life. As humankind continues to explore Mars, Perseverance intends to fulfill four key science objectives, as outlined by JPL:

• Identify past environments on Mars that could have supported microbial life

• Pave the way for human exploration beyond the Moon

Perseverance is also ferrying several technological innovations to the surface of Mars. These include a helicopter named Ingenuity, the first aircraft to attempt powered, controlled flight on another planet. Additionally, Perseverance will test new technology for future robotic and human missions to the Red Planet.

With nineteen cameras on the rover itself and four on other parts of the spacecraft involved in EDL, NASA hopes the public will be able to experience what it is like to land on Mars, as well as to hear the sounds of landing for the first time with a high tech microphone affixed to the side of the rover.

As its name implies, Perseverance embodies NASA's– and the rest of the scientific community's-spirit of overcoming challenges. After all, getting the spacecraft to the launch pad during a pandemic was no small feat.

With awareness of the impact of the COVID-19 pandemic and the subsequent challenges the entire world is experiencing at this time, the mission crew installed a commemorative plaque to honor the dedication and hard work of the medical community and first responders from around the globe.

Featuring a snake-entwined rod to symbolize healing and medicine, the plaque, which was attached to the rover in May 2020 at Kennedy Space Center in Florida, pays tribute to the perseverance of healthcare workers.

With this mission, the team wants to "inspire the entire world, and future explorers, to forge new paths and make discoveries on which the next generation can build."