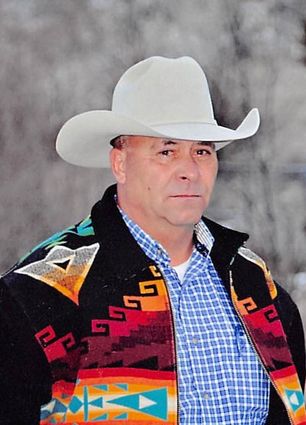 William "Bill" W. Young 54, passed away at his residence in Havre, of natural causes. No services are planned at this time. Please visit Bill's online memorial page at http://www.hollandbonine.com to leave a message of condolence for his family.

William was born February 13, 1966 in Havre, to Jack and Helen Young of Lloyd, Montana. He grew up on the family ranch and graduated high school in Chinook, with the class of 1985. He worked for twenty years, along-side his father, attending to the needs of the cattle. He also worked for several neighboring ranches and was a brand inspector for many years. He enjoyed the cowboy way of life riding horses and working cattle. He married Wendy Nelson in 1995 and the couple later divorced.

Bill's creativity and craftmanship was often seen in the sculptures, picture frames and decorative items that he made and sold at the farmer's market in Havre. Bill took pride in his work. He was a skilled welder, a perfectionist and enjoyed working with his hands which was evident in his mechanical abilities. Bill was easy to start a conversation with if you could get a word in. He liked to tease his friends and anyone he could get a rise out of. Bill loved to cook and was always on Facebook offering a meal to someone if they needed it. He also loved to bake and share his delicious treats with others. Bill's generosity will be missed by those that benefitted from it.

An avid outdoorsman, Bill loved to fish the many lakes, creeks and reservoirs in the area. Bill moved to Havre in 2014, but still traveled out to the ranch to help out. He worked for Bill Bradbury, during calving season and also worked for his cousin Mike, at Glass Works.

William was preceded in death by his mother, Helen Young: and his grandparents, Bill and Una Young of Chinook and Mike and Evelyn LaBuda of Big Sandy.