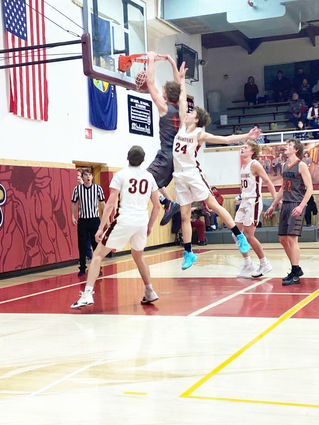 Chinook senior Reese Elliot gets inside for a two handed slam against the Longhorns in Fort Benton Saturday night. Elliot finished with a game high 25 points in the contest.

It's that time of year again where the excitement of tournament play begins to highlight the talk of the high school basketball world. The District 9C Tournament got underway, Tuesday, February 16 at the site of the higher seeded school. Full tournament results will be included in next weeks edition.

The Chinook Sugarbeeters (12-2) split their final two regular season contests and will begin the District 9C Tournament as the No. 2 seed. The 'Beeter took care of business Friday night in their home finale, defeating the North Star Knights handily 75-32. Senior Ethan Bell paced the 'Beeter of...