Tornadoes earn No. 2 Seed as District 9C Tournament Gets Underway This Week 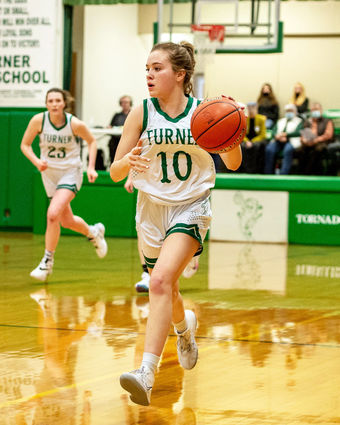 Turner freshman Emma Billmayer had herself a game Tuesday night at home against the North Star Knights. Billmayer connected three times from beyond the arc and scored 19 points in the Tornadoes huge 61-52 win that helped them lock up the No. 2 Seed in the District 9C Tournament.

The District 9C regular season concluded this past weekend with a flurry of games being played. In an effort to get as many rescheduled contest played with respect to tournament seeding, games were played nearly every day. The District 9C Tournament got started Tuesday, February 16 at the higher seeded school. Full tournament results will be included in next weeks paper.

The Turner Tornadoes (10-3), earned the No. 2 seed entering the tournament. Turner completed their regular season with a 61-52 win at home Tuesday night over the North Star Knights. Friday Turner easily dispatched Big Sandy...