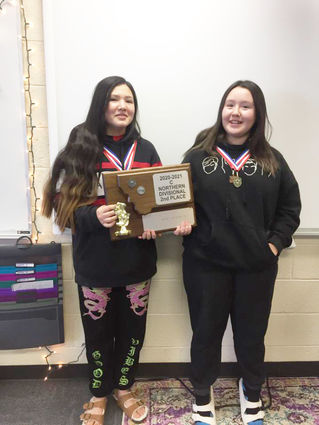 After the judge's scores were all tallied from the 2020-2021 State Class B/C Speech and Drama Tournament that was hosted by Huntley Project School District and held on January 29 – 30, the Hays-Lodgepole/Dodson cooperative team learned that they had won sixth place. While there was no trophy for that place at State, the two freshmen who comprised the team, Haley Cichosz and Jayla Haakanson, had earlier captured Class C Northern Divisional Second Place honors in Dramatic Theater.

Cichosz and Haakanson are both students at Hays-Lodgepole High School. "This is the first Speech and Drama trop...