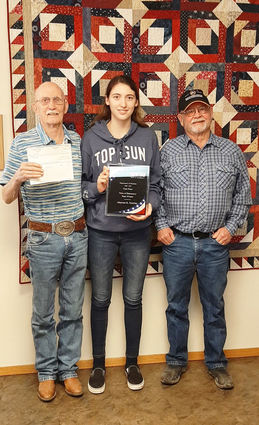 On Tuesday, February 23, Don Richman, Commander for Post 4744 of the Veterans of Foreign Wars (VFW), and Chuck Wasser, Quartermaster for Post 4744, presented Alaynee Hawley with a check for $2,000 as the First Place State Winner of the Voice of Democracy Essay Contest for writing and speaking on the theme "Is This the Country the Founders Envisioned?"

In a small gathering that took place at the Richman Insurance building in Harlem, Hawley also received a plaque, medal, and certificate honoring her accomplishment. To further commemorate her achievement, the VFW will be sending her a jacket, as well as a box of VFW Voice of Democracy prizes.

"To be named one of the top fifty-three winners from a field of approximately 64,000 total participants from across the country and overseas is an outstanding achievement," Nick Lopez wrote in a congratulatory note to Hawley.

Lopez, who is the Youth Programs/Community Service Coordinator with the VFW National Headquarters in Kansas City, Missouri, expressed regret in having to announce that due to the COVID-19 pandemic, the VFW would have to forego the typical in-person gathering to celebrate Hawley's achievement. In lieu of the Washington, D.C. celebration, the VFW is planning a virtual Parade of Winners ceremony.

The daughter of Bryan and Angie Hawley and the oldest of five siblings, Hawley, who is a senior at Harlem High School, has been accepted to attend the Air Force Academy in Colorado Springs where she will study Aerospace Engineering. "The end goal is to takeover for Elon Musk," she jokingly said of the SpaceX CEO.

"This is clearly a young lady who is not going to sit back," Richman stated. "Alaynee is a natural leader who's willing to work for what she wants and to do what it takes to be successful."

Richman, an Army Vietnam War Veteran, wrote letters of recommendation to the academies to support Hawley's future in the Air Force. "It's easy to support someone who's so kind and worthy," Richman said of Hawley.

Hawley responded, "It has always been my childhood dream to fly."

Another thing she'd like to do is jump from an airplane, a surprising declaration from a gal who says of the ocean: "Big water is scary. I might be a swimmer, but I don't like not knowing what's there or not being able to see the bottom."

In discussing her future, Hawley spoke with enthusiasm about both the challenges and opportunities of being a cadet. She is looking forward to Induction Day, which is June 24 at the Academy. "Plebe Summer is like boot camp, and that will last six weeks," she explained.

Hawley said she saw the Voice of Democracy Essay Contest on a list of scholarships and thought that writing an essay to express her point of view would be an easy enough task. "Would our country's founders be disappointed in what is happening with our country's division today?

Yes. Surprised? No. The Revolutionary War had Americans fighting on both sides, so this kind of division over beliefs isn't new. Although our founders expected that change would happen, they could not have anticipated some of the expanding technology, but they would be disappointed that we haven't learned from history," she said.

On this topic, in one section of her speech, Hawley writes: "The Founders would be disappointed from a government standpoint but not surprised. The Constitution was written to be a solid foundation, yet flexible, as the Founders knew that the country would change. They wanted each American citizen to keep their freedoms throughout these evolutions. However, the Founding Fathers' greatest fear was an overbearing federal government. They designed the government to have three branches, gave each state their own ability to govern, and even created checks and balances to prevent too much federal power. Yet, the government has more power and regulation today than it has ever before, and they had never hoped that would happen."

Because entries in this worldwide competition begin at the Post level, once Hawley had created her essay, she approached Richman about next steps. When Richman learned that no other Blaine County youth were competing, he shared Hawley's submission with Wasser, who told her that the Post would need her to record her thoughts and copy them to an audio CD/flash drive to be submitted, along with paperwork, to State VFW officials. The rest, as they say, is history.

Established in 1947, the Voice of Democracy audio-essay program provides high school students like Hawley with the unique opportunity to express themselves on a democratic and patriotic-themed topic. The voice-recorded essay, which must be three to five minutes in length, is judged on Originality, Content, and Delivery. In meeting the criteria point for originality, the treatment of the theme should show imagination and human interest. Content-wise, the judges are listening for a fully developed theme and transitions that move smoothly from one idea to another. Delivery involves speech that is clear and content that is spoken in a credible manner.

According to Darcie Jones, Communications Coordinator at the VFW National Headquarters, this year's virtual Parade of Winners to celebrate the individual state winners and to name the Voice of Democracy first place winner will be announced at a later day. For more information as it becomes available, interested individuals are encouraged to visit vfw.org.

"You're part of an important legacy, Alaynee; we'll be watching you, supporting you, and expecting great things," Richman and Wasser both said as a way of complimenting her achievement.