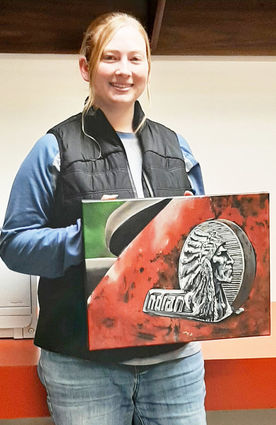 Matkin holds her original oil painting of an Indian emblem. She has sold prints of this work, which she claims took an unexpected amount of time to complete as she worked to achieve accurate reds.

Kirsten (Wilhelm) Matkin has been drawing since she was in eighth grade. At that time, she did mostly pencil drawings but branched into working with other mediums such as ink and paint when she was in high school.

After graduating from Chinook High School in 2009, Kirsten decided to attend Montana State University-Northern to earn a degree in Graphic Design. On that degree path, she took several courses in fine arts: oil painting, acrylics, illustration, and watercolor. While working on her bachelor's degree, she earned her missus on November 12, 2012 when she married Lee Matkin.

Matkin completed her Bachelor of Arts Degree in 2013 with a minor in Small Business Management. A year later, the couple's daughter Harper was born on March 10.

Although Matkin isn't currently working full-time in her degree area, she does still create art. On January 31, she finished a stippling drawing of a Red Aussie mixed breed dog. "I found the model online and decided to recreate it," Matkin said. "It is made entirely out of tiny, tiny dots. I am so happy to have this done!"

While some might conjure the term tedium upon seeing the intricacy of the animal created with pen and ink, Matkin claims that most of her projects combat boredom. Stippling, in particular, relaxes her. "I'm not fast," she said. "And each piece is time consuming."

Stippling is a technique that incorporates several small circles or dots in the same color to create a composition. These dots can be drawn, painted, or etched onto a surface using a variety of mediums.

These stippling dots group together to create a recognizable image. The closer a viewer is to the image, the more likely he/she will be able to pick out individual dots. As the viewer steps further away, the complete picture emerges instead.

Many people have encouraged Matkin to sell her artwork online or to take some of it to craft shows to celebrate her talent, but she doesn't think she has the volume of art for such a business venture. In addition to her roles as wife, mother, and maker of art, Matkin works part-time as a Juvenile Probation Program Assistant for the State of Montana. "Life gets in the way, and I just don't have the luxury of time that art requires," she said.

However, Matkin has done some commissioned work in the past. She described a piece she was commissioned to create for Carrie Mundlin. The pencil and stippling piece was of Mundlin's dad, Dale Gilmore, on horseback. Matkin explained that her own mother ended up buying the piece and gifting it to Mundlin.

Matkin has also turned some of her paintings into prints and sold a few of those. She takes the originals to Rimrock Art & Frames in Billings where the shop proprietor takes photographs of her art, processes them to a digital format, and then gives them to her on a USB.

"I actually order the prints online through Bay Photo Lab because getting prints through Rimrock is so expensive that I wouldn't be able to earn much profit, so I use Bay for the actual printing," she explained.

Art has always drawn Matkin's interest. She describes it as "especially satisfying." When asked what about art specifically appeals to her, she said she considers it aesthetically pleasing and is always impressed by how detailed it can get. "The various styles range from simple to detailed to symbolic."

To further explain, she used Vincent van Gogh's "Starry Night" as an illustration. "The painting is somewhat abstract with its different brushstrokes. With thick and heavy swirls and intense but cool colors, van Gogh creates motion and expresses an impression of the world he saw. Because I can either make something realistic and photogenic or just play with textures and colors, art has the power to be both fun and challenging at the same time."

This combination came to life in a 16x20 oil painting of an Imperial insignia that Matkin completed in December 2018. "I am especially proud of the way the rust patina turned out in the reproduction of a friend's car. It looks like rust, but the imagination enters as the art flows organically," she described. "The emblems from old cars are like old advertisements, and each one tells a story. I am drawn to vintage cars; not whole body cars-since those are more a subject of photography or realism-but the weathering process and the rust patina that forms once they get parked in a pasture or on a curb somewhere. I like to capture that organic process and to imagine each car's story while I focus on the badge."

Although she finds old emblems and badges fascinating, Matkin seems attracted to history in general. Her pen and pencil portraits of personalities like Clark Gable, Jean Harlow, John Dillinger, and Marilyn Monroe provide evidence of this attraction. 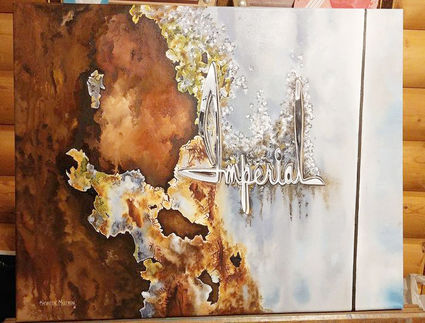 Completed in December 2018, this 16x20 of an Imperial insignia is done in oil. Matkin is especially proud of the way the rust patina turned out in the reproduction of a friend's car.

Anyone who may wish to commission a piece of artwork should inquire with Matkin, who is open to the idea of creating for others. She can be reached at 945-2200.

When asked what advice she might share with future artists, Matkin responded: "I guess I would say, don't be afraid to try different mediums like oil, watercolor, pastels, pencil, or photography. You never know what you are proficient in, and you might surprise yourself."

These days, Matkin enjoys the surprises of motherhood and watching her daughter Harper draw detailed pictures. Maybe there is some truth in the idea of a child following in the footsteps of a parent.