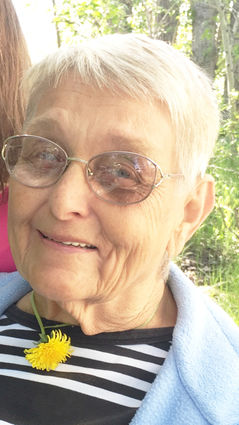 She was born on August 31, 1942 in Havre, Montana to the late Ethel and John McSloy. Grave side services were held Saturday, March 13, 2021 at 2 pm at the Kuper Memorial Cemetery.

Mary was a longtime resident of Chinook, Montana where she was a member of the Eagles, VFW, Red Hats, Bowling leagues and the Fifth Ave. Christian Church. She enjoyed baking pies for the County Fair and cooking Chinese food for family and friends. For many years she would prepare a Christmas Eve dinner from a different nationality. Mary loved her flower gardens, sewing, camping, her swing on the front porch, traveling with her husband, children and grandchildren. Her and Greg traveled to Ireland, Scotland, Wales, Australia, New Zealand, Canada, South America and many more places. Greg said they were to all 7 continents but not all countries. Her love for travel also included taking all of her children and grandchildren to the Calgary Zoo and Drumheller Dinosaur Museum as well as a trip to Disneyland. Our family filled an entire plane, (even though it was a smaller plane). Her children and grandchildren were often seen with her at Country Concerts or plays.

Mary received her Bachelor degree in Education and taught school for several years and did substitute teaching after retiring. She also was a cook at the Pastime Steakhouse while working for Blaine County Treasurer's office from 1978 to 2004 when she retired.

She was preceded in death by her parents John and Ethel McSloy; a sister Ruby McSloy; and former spouses Robert Brough and Martin (Buzzy) Gardipee.

In lieu of flowers, donations can be made to a charity of you choice in her name.