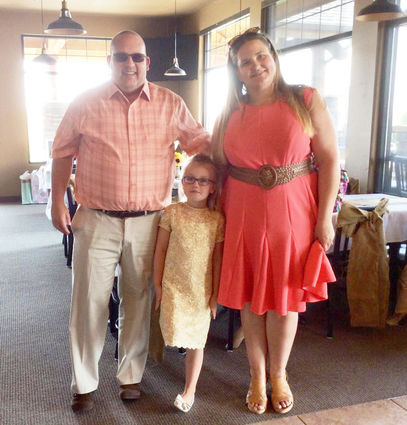 Fred Hofman, who will serve as Chinook School District's next superintendent, poses here with his daughter, Adele, and wife, Faith.

Hofman grew up in Culbertson, Montana, and graduated from high school there in 1990. He went on to Dickinson State University, and by December 1994, he had earned a Bachelor of Science Degree in Composite Social and Behavioral Science in Education. As part of that degree, Hofman student taught World History, U.S. History, and Government at Sidney High School. However, his path would not immediately take him into teaching. The starting pay for teachers was a major deterrent.

"My student teaching experience at Sidney went well. I truly enjoyed it. I had the opportunity to student teach under three different high school teachers who taught social studies completely differenty from one another. It helped me form my own basis for how I would end up teaching. I had always planned to attend law school, not so much to be an attorney and rake in the money, as it were, but rather to put myself in a position to help make 'things' better," Hofman recalled.

To fulfill those plans, he attended the University of North Dakota School of Law at Grand Forks, earning his Juris Doctorate in 1998. Shortly thereafter, Hofman was named Outstanding Member of Legal Aid Association Juvenile Prosecutor for Spirit Lake Indian Reservation at Fort Totten, North Dakota (ND). He also served on the ND Legislative Counsel's Senate Education and Government Affairs committees before going on to perform for nine years as an attorney.

During his law career, Hofman worked at Nilles Law Firm as an Associate Attorney, acted as the Roosevelt County Attorney, and assisted the city of Billings as Deputy City Attorney. Some of the cases he litigated dealt with juvenile offenses and child removal proceedings. He also collaborated with the Big Muddy River Drug Task Force-a multi-county, multi-city, and tribal law enforcement organization-and obtained a grant from the Board of Crime Control to help combat underage drinking. Because he seemed to gravitate towards programs that assist youth, Hofman returned to school, this time to earn a Master's Degree of Educational Leadership in School Administration from Rocky Mountain College in Billings.

"The people I dealt with during my time as a prosecutor all too often had one thing in common: lack of a high school diploma. If my memory serves me correctly, approximately 75% of prison inmates are lacking a high school diploma. I saw firsthand the costs of this in 'the system,' [conditions] which we all pay for," Hofman explained.

He considered the amount of good he could do for society working as a prosecutor as far less than doing something to help reduce the number of people in the system. So, Hofman made the decision to leave that domain-despite the financial impact of such a move-in order to have what he described as "a more meaningful career and life." He considers being an educator, "a noble profession-one that matters" and one that he enjoys.

While making progress on his master's degree, Hofman taught social studies in Brockton from 2007-2009, where he also coached football, track, and cross country.

In addition, Hofman functioned as a high school principal at both Poplar and Absarokee before taking the reins as the superintendent and K-12 principal at Harrison in 2012. His wife, Faith currently works as a special education paraeducator at Harrison Public School.

When he assumes the position as superintendent for the Chinook School District on July first, Hofman will put this range of experience to work. His philosophy of education will infuse his approach.

"I firmly believe the heart and soul of America is entrenched in our public schools," he said. "All children are capable of learning, and they are all unique, as is everyone. To me, children, and adults for that matter, learn best when they are engaged in their learning and excited to learn. Teachers should have a certain degree of freedom in their classrooms to create an environment that is supportive to that end. However, teachers, administrators, parents, and the community need to have high expectations for their students. We cannot let the bar be set too low just so they can jump over it. Importantly, that bar may not always be the same height for each child; we all have different abilities in different areas. Our goal is to help each student reach his/her full potential, whatever that happens to be."

At the helm of Chinook Public Schools, Hofman hopes to join a team that shares this goal. "We want our students to be not just college and career ready; we want them to be able to think critically, learn and adapt to whatever awaits them once they leave Chinook Public Schools. We want students who graduate from high school at Chinook to be in a position to choose where they want to go from here-whether that be in the trades, arts, engineering, agriculture, science, mathematics, or some other discipline," Hofman said.

To reach that end, Hofman plans to continue discussions with the current administration to obtain input and feedback on Chinook's present status. "I will also want to talk with the teachers and have further discussions with the Board to learn what they see as the school's strengths and what they see as areas we need to get better at. I really need to evaluate where we are and where we are currently going before I am in a proper position to implement any changes, short term or otherwise. Like every student is unique, every school district and school community is unique."

On the path to learning about the school and community, Hofman hopes to develop a positive and supportive relationship with teachers and other school personnel. "I want all school staff to know that we are all in this together and that I am willing to roll up my sleeves and do my part to keep things moving in the right direction. We may all have slightly different roles-whether that is driving a bus, cooking lunch, cleaning the school, or teaching kids in the classroom-but our primary purpose is the same. We are all trying to create a safe, clean environment that is conducive to learning. My job is to help put teachers in the best position possible to be effective instructors for our students."

Hofman and his wife have a daughter, Adele, who will be entering the fifth grade in the next school year. According to her father, Adele is excited to have more than three students in her grade level.

"Faith, Adele, and I have been in Harrison for nine years, and we decided to move a little closer to my mother who still resides at the family farm in Culbertson. We are excited to be moving to Chinook," Hofman said.