Trent Noel and Craig Todd stand with the masterpiece they shared in creating--one as artist, the other as mentor and youth advocate.

When Blaine County's MSU-Extension Agent, Trent Noel attended Harlem Junior/Senior High School, he participated in the Montana GEAR UP program. Noel largely credits that program, a Pathways Scholarship, and the mentorship he received from project advisor Craig Todd for his post-secondary degree.

GEAR UP, which stands for Gaining Early Awareness and Readiness for Undergraduate Programs, serves students beginning no later than the seventh grade and follows them through high school. It gives academically prepared students from low and low to middle-income families access to a post-secondary education.

Because Montana GEAR UP believes that postsecondary education is possible for all Montana students-regardless of economic background-the program supports schools, students, and their families to increase students' college and career readiness through academic preparedness, postsecondary planning, and financial aid knowledge so that they may succeed in their education beyond high school.

A Federal discretionary grant program, GEAR UP provides grants to local governments. Some of these funds are allocated for college scholarships, such as the Pathways Scholarship. Scholarships are awarded based upon a variety of factors, including participation in extra-curricular activities, community service or volunteer projects, the quality of response on the written application, and the quality of the project submitted or described.

Noel won a Pathways Scholarship valued at approximately $25,000. "This scholarship paid for most of my schooling; being a resident's advisor (RA) covered the rest. Since I basically went to school for free, I am very grateful for this scholarship," Noel stated.

Because he was attending a high school populated primarily by Native American students and because he possessed a passion for metal-working, Noel wanted to produce something culturally relevant. But what?

Actually, there's quite a story behind how Noel acquired his community service idea: "The late Joe Nemes, Sr.-a Harlem educator who retired in 1992-was on a walk in Canada when he saw a cut out of a buffalo on a fence post. He took a picture of the buffalo and brought it to Craig to see if he could make the same cut-out on the CNC machine because Joe loved this cut-out. Craig decided that the Harlem/Fort Belknap community really needed a life-size version of this to show roots and cultural pride. The project itself was passed between a few students applying for the scholarship before it was set in my lap," Noel explained.

As identified by Noel, a computer numerical control machine-commonly called a CNC machine-takes digitized data from a computer and program which are used to control, automate, and monitor the machine's movements.

Noel envisioned creating a life-size metal sculpture. In his project paperwork, he wrote: "Building a buffalo like this would take many skills, including welding and fabrication, layout and measuring, and design. All of these aptitudes I enjoy using in school and in my free time."

Under the guidance of his advisor, Craig Todd, who currently teaches Technology Education and Video Production/Communication at Harlem High School (HHS), Noel's vision began to come to life when he scaled it up using a computer-aided design (CAD) program.

"With CAD software, it's possible to build an entire model in an imaginary space, letting you visualize properties like height, width, or material before the model is used for a particular application," Noel explained. "Because we wanted the buffalo to be visible from a distance, we decided that a height of eight feet would be appropriate. Using the dimensioning tool on the Pro Desktop CAD program, I drug it to that height."

Once the drawing was scaled, Noel cut and laid out the metal. However, when he attempted to fit the pieces together, the angles didn't match. "Whether it was the limited accuracy of the tools or measurements that didn't transfer correctly, we soon realized this process just wasn't going to work," Todd stated.

So, Noel returned to the drawing board. He projected the image onto a wall using an opaque projector, traced it, and cut out a pattern. Then, he built metal pieces to fit the tracing. These pieces were then fitted together.

"Because of angle issues, Trent still had to hand-fit every joint. He performed some partial cuts with the plasma cutter, bent the steel tubing to form the angles, filled the gaps, and tack-welded the joints," explained Todd.

After the better part of a year, Noel completed the project in 2014. Although the plan was for the buffalo to occupy school grounds, after additional thought, he decided to give it to the Fort Belknap Indian Reservation so that it could stand along Highway 66 near the buffalo pasture. However, as time and money created barriers, interest waned and that plan never materialized. Instead, the buffalo reclined against a wall in the Industrial Arts Complex at HHS until recently when it was decided that it needed a permanent home.

With the joint efforts of Marty Dirden, Clint Brown, Alan Brisbo, and Todd, the sculpture was mounted on a concrete pad located on the north side of school property near the outdoor basketball courts. It stands 95 inches tall and is just under twelve feet long from nose to tail.

According to Todd, the plan is for the "buffalo's corral" to be planted in sweet grass that can be harvested and braided for cultural activities. Todd referred to the sculpture as a "geefalo" since it is a geometric buffalo.

About its location, Noel said: "I know it does not fit the Wildcats mascot, but the buffalo represents more than that. It represents the culture and roots of the area, so it works in an odd kind of way." 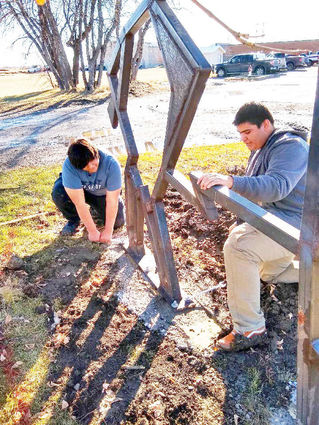 Alan Brisbo and Clint Brown tighten the bolts to secure the Geometric Buffalo in its permanent home on the grounds of Harlem High School.

Noel also gives immense credit to Todd. "He was my advisor all through high school. As the tech teacher at Harlem, Craig was there every step of the way for this project. He was also the person that helped edit and get kids on the right path for their GEAR UP scholarships. Needless to say, almost every student hated Craig during GEAR UP time because he is very meticulous and wants everyone to succeed. So, he made us do draft, after draft, after draft of our write ups. Every write up that was turned in to him was full of red marks by the time he was done with it. If you stuck with the revisions and let him help you, you were golden. Harlem would not have had as many scholarship recipients had it not been for Craig. He does so much for the students outside of school on his own time."

At the completion of the project, Noel made small cutouts of this buffalo to give to his family, the Todd family, and the Nemes family. "So, the once-sculpture to a picture back to a sculpture came full circle back to Joe. In appreciation, we also made small cutouts and stands for the Montana GEAR UP offices," Noel concluded.