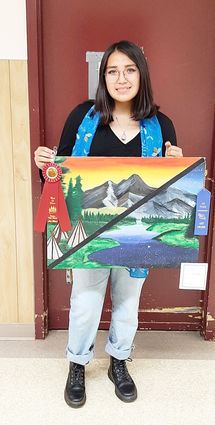 Another favored art project was the imitation of Grant Wood's American Gothic, which is firmly entrenched in the nation's popular culture. Although Wood intended it to be a positive statement about rural American values, an image of reassurance and resilience at a time of great dislocation and disillusionment, it is often interpreted as a satirical comment on the midwestern character.

The Harlem Junior/Senior High art students, together with their teacher, Ms. Mary-Kate French, put together a Spring Art Exhibition. With the judging complete, ribbons accompanied the artwork, which remained on display in the lobby of the high school by the big gym until May 25. One of the show's highlights was a blacklight painting exhibit, loosely inspired by Vincent Van Gogh, who is considered to be one of the greatest of the Post-Impressionists.

The public was admitted to a limited, socially-distanced Open House viewing on Friday, May 21 from 10:00 a.m. until 2:00 p.m. Groups of four with masks required were allowed to view the artwork created by Harlem High School and Junior High School (HHS) artists.

About her work, Blackcrow said, "What I like about art is that there are no rules for interpretation; every story may differ but all art has intention."

King added, "We might be going for a specific idea, but what finally manifests might not be exactly what we intended. We just have to trust the process."

To create the featured portion of the show, an enclosed blacklight painting exhibit, the students used a combination of regular and UV-reactive acrylic paints that glow under blacklights. Then, they built an enclosed, darkened display so that the visitors to the exhibit could experience the full effect of the glowing artwork.

"It was certainly a challenge," French reported. "It was the first time I had experimented with this medium with students; I'm happy to say that it was a success. The students enjoyed the blacklight painting project because they love new, funky things. I also had them working with duct tape and some other fun materials."

Other art projects in which French's students took pleasure include a parody of "American Gothic" by Grant Wood. "They very much enjoyed putting a funny, pop-culture spin on famous works of art. In addition, students almost universally love pottery. There's something about working with clay and getting your hands dirty that takes most people back to their childhoods, high school students included," French said.

When asked what inspired her to host an art show, French stated: "I make it a teaching goal each year to do at least one art show. But this year especially, I felt that it was important for students to express themselves and to be 'seen' and 'heard.' This past year has been a challenge for us all, and art made by young people is such a great reminder of all the beauty that is still in the world. I wanted my students to have an outlet for their creativity and to give them a sense of normalcy and optimism for things to come. Their work inspires me, and I wanted to share it with as many people as possible."

For her acrylic painting Where Hands Touch, Jessica King won the Students' Choice Award. Inspired by both van Gogh and Michelangelo, it was one of several pieces in the blacklight painting exhibit. She displayed four additional pieces in the art show.

Early on with COVID still creating challenges, there was no guarantee that an art show would be possible. As a result, French and her students did not focus as much on making art for a show but focused instead on using art as an outlet for all they were feeling and thinking. "Our making was very much an affirmation of sorts, a way for us to declare: 'We are still here, we are still creating, we are still dreaming,' despite hardships," French explained.

In addition to the artwork of high school students, the art exhibit featured some contributions from seventh grade art. French teaches seventh graders for one quarter each in rotating groups, so their Zentangle Landscapes were on display as well.

As key take-aways, French hopes that her students come out of this year with a realization of how therapeutic and healthy art can be in their lives. "All students are artists," she said. "They just have to find their niche. A tool for communication, art gives us a way to talk about life."