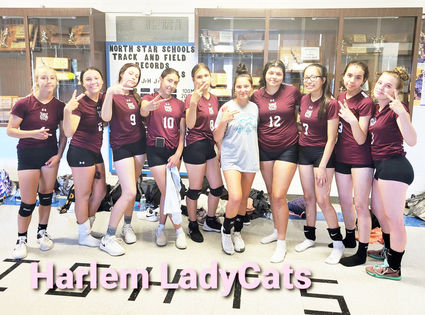 As the old adage goes 'Next Season Starts Now' is truly the case nowadays. The 2020-21 high school sports schedule concluded just a week ago with State Track and Field championships, but when the calendar flipped to June teams were back in action preparing for the upcoming school year.

The Chinook Sugarbeeter Football team has been working out together in the mornings in preparation for the team camp in Bozeman this week. "As a coaching staff we a excited to have a great group of returners as well as a good group coming up. This kids are going to mesh well together. We have a lot of athletes on the team which is great from a coaches perspective because we can move kids around quite a bit this summer and find some good fits for kids," said Chinook Head Football Coach Mike Jones.

The gym is open for volleyball on Tuesdays 6-7 for incoming 7th and 8th graders and for 9-12 also Tuesdays from 7-8:30 p.m. "Northern and Providence run camps in August and the University of Montana in July I think," Molyneaux added. "Mostly I encourage our players to take the time to get in our own gym to work on their skills and to get in the weight room, which is open Monday through Wednesday nights.

The Lady Cat Volleyball team had a solid tournament in Rudyard and Head Coach Kim Faulkinberry was pleased with the results, "Our first tourney of the summer was pretty good! We started off a bit slow as we haven't really had a chance to play together until this tourney." Faulkinberry added that getting practice in has been a team effort, "Our gym is shut down for the summer for repainting so we were able to have one short practice in the elementary gym. It doesn't have a regulation size floor but it gives us a chance to get some arms and hands on the volleyball." The North Star tournament roster included, Alexis Cochran, Chloe Messerly, Taya Trottier, Vanise Little, Jessica King, Mylah Rider, Keonna Medicine Bear, Emma Billmayer, MaLea Moore, and Kaitlyn Johnson. "We are hoping to get to a few more tourneys this summer. Many of the volleyball girls are also participating in basketball tourneys as well," concluded Faulkinberry.

Harlem Wildcat boys basketball Head Coach Geno LeValdo has had his team in the gym and preparing for the upcoming season. In May the Wildcats took seven players consisting of Tyler Cichosz, Daniel Lawrence, Teagan LeValdo, RJ Ramone, Deshon Shambo, Tommy Champagne and Moses Lawrence to the Hoops God Tournament. "We played against the Young Guns of North Dakota and they were a team of several all-stars including Jesse White Mr. North Dakota, so it was a special to play against him," said LeValdo. "It was a very good weekend, we got to play a very talented team and we gained a lot of respect."

The Chinook Sugarbeeter football team gets some early morning work in as they have a busy June planned with team camps and practice.

This past weekend Harlem was in Belt with Tyler Cichosz, Daniel Lawrence, Teagan LeValdo, Deshon Shambo, Amari Stanley, Tommy Champagne, Moses Lawrence and Devon Doney making up the roster. "We played Lewistown, a very talented team and we came up short and lost by 12, 62-50 but we got to shake off the cobwebs and rust that game," LeValdo commented. Following the opener the Wildcats had plenty of success beating the Belt Varsity and Junior Varsity, pulling out a late victory over a very physical Broadus team and then beating Sunburst. They will next head to the team camp in Dillon, June 12-14.

The Lady Cats were in Dillon this past weekend where they went 2-1. June 11-12 the team will head Fairfield to take part in their tournament. June 14-17 the Lady Cats will head to Dixie State University for a team camp. They will be in Belt June 25-26

In July, Harlem will play in the Big Sky State games the 16-18 and then head to the Montana State University - Billings Team Camp July 23-25.

The Hays/Lodge Pole Thunderbird girls basketball team was in Belt this past weekend. Results of their tournament were unavailable at press time.