Several runners with ties to Blaine County took part in the inaugural 'Run The Paw' Bear Paw Marathon, Half Marathon and 5K Races this past Saturday on a course that snaked through Beaver Creek and ended at Montana State University Northern.

Chinook's Leslie Zellmer was the Womens Marathon winner with a time of 3:41.29. "This was my third marathon and I set a Marathon personal record," said Zellmer. "I've been running my whole life. I started Cross Country in 7th grade and ran CC and track all through high school.

This weekends race was high on her 'to do list' "I was really looking forward to this race. I knew it was going to be a smaller field of runners than other races and a few months ago I made a goal to race a 3:45 and win it. I thought 'this is my chance to win one.' I am very happy with my results."

The course conditions were to her liking, "Although the course started in the mountains and had an elevation decline, there were a lot of hills. Though challenging, I loved it! It was thrilling to run in the Bear Paws on familiar roads and it was a beautiful day for a run in the mountains."

Chinook High School junior to be Anna Terry just concluded an outstanding Track and Field season a week prior and turned in another stellar effort Saturday. Terry won the Womans 5K with a time of 21:21.50.

Chinooks Derek Bell had a goal in running his first marathon, "I first became interested in running after reading the book 'born to run' a little over a year ago, and since then it's slowly but surely become a key part of my daily routine." Adding to that Bell is focused on running more, "My most recent goals were to run 23 miles on my 23rd birthday and then to run 100 miles in a month, so running a marathon just seemed like the natural next step."

Havre High School junior Brody Henry is the Grandson of Mike and Michele Farmer and the son of 1993 CHS graduate Julianne and her husband Trevor Henry. 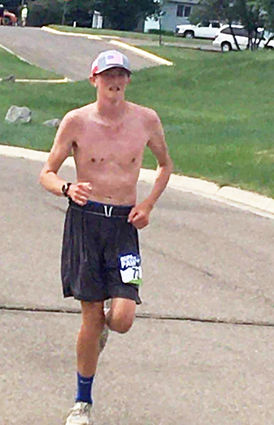 Brody Henry, a Havre High School soon to be junior, was the youngest runner in the Marathon at age 16 and finished in 4:18.56.

Brody was the youngest racer in the Marathon field and completed the 26.3 mile race in 4:18.56. He decided to run the marathon just two weeks prior, "I already had plans to do a half marathon later this month and thought that this was a perfect opportunity to try a full one. I thought that it would be fun to try something a little more challenging." What was the hardest part, "When your entire body hurts after 17 miles and then you still have to run nine more! It feels really good to just be done."

In addition to the beautiful day, the event was very well ran, "There were just as many volunteers as race participants, if not more," said Zellmer. "It was so wonderful to see familiar faces from the community all along the route, something you don't get from out of town races. The race organizers really did a terrific job! Accolades to them for putting on such a great race! I know it takes a ton of work to pull off such a large event like this and they did it!"