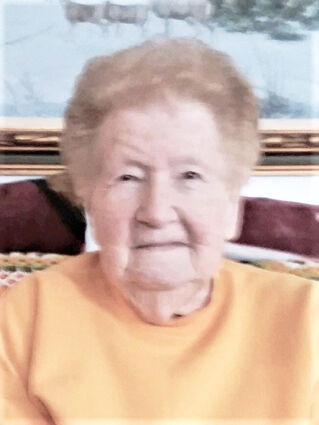 Joan Dilger, 98, of Havre passed away peacefully of natural causes at Northern Montana Hospital on Friday, June 26, 2021. Cremation has taken place and a Celebration of Life was held at 2:00 p.m. Tuesday, July 6, 2021, at Immanuel Baptist Church, Havre. Burial will be at Corvallis Cemetery at a later date. Holland and Bonine has been entrusted with services and arrangements. Please visit Joan's online memorial page and leave a message of condolence for her family at http://www.hollandbonine.com.

Joan was born on March 17, 1923 at the family homestead on Cow Creek, South of Chinook, Montana to Jake and Lucille (McNeil) Powell. She attended Rattlesnake Country School graduating 8th grade. At an early age, Joan worked as a cook's helper and a cook at the neighboring ranches. This is where she found her love of cooking. She was working for Eddie Cuerth, cooking for the hired men when she met Edwin Sparks and love followed. Edwin and Joan were married on April 2, 1940, in Malta. They made their first home in a two-room log cabin south of Hays. During this time, three children were born, Harriet, Marcella and Stanley, all the while cooking for the hired men. In the Fall of 1947, they moved to "the Murphy Place", 50 miles south of Chinook. It was there two more children were born, Delvine and Linda. Joan was a homemaker, cooking and canning was her favorite task, while raising her children and sometimes working as the hired hand, harvesting and working cattle. Every year, Joan had a large garden, canning and storing the vegetables to survive the harsh winters.

In 1957, the Rattlesnake School closed. Joan moved to Chinook, renting a house in order for the four children to finish school. Once again, Joan went to work cooking at the Bar X Café. Two years later, after Harriett graduated, she moved back to the ranch. Due to Edwin's health, they sold the ranch In 1971, bought a home and resided in Chinook. In February 1978, they moved to Stevensville, in the Bitterroot Valley. That same year Edwin passed away, May 10th. Shortly after, Joan moved to Corvallis and went to work at the Corvallis Tavern. It was there she met Jake Dilger. They were married January 26,1980 and made their home in Corvallis until Summer 2002. Joan and Jake sold their home and moved to Brady, Montana until Jake's passing January 17, 2017. Joan made her final move in May of 2017, to Havre Eagles Manor. She quickly made friends and took over making coffee for the morning coffee drinkers. Before long she was back to doing what she loved best, baking and cooking treats for them, banana bread, apple sauce cake, brownies, cookies and occasionally a pie. Her passion for baking continued as she had baked her final pie on the Tuesday before her passing.

Joan's happiest moments were spent in front of the stove cooking or baking. She also enjoyed planting flowers, dancing to old country music and watching westerns on TV. If anyone mentioned playing cards, she was the first one to be there. Her favorite card game was pinochle, along with rummy and cribbage.

After moving to Havre, she started attending Immanuel Baptist Church with her daughter Harriet, and it was there that Joan heard the gospel of grace, the message of what Christ has done to reconcile sinners to God the father, and she believed. She was baptized on December 3, 2017, at the age of 94.

She was preceded in death by her parents, 5 sisters, 2 brothers and 1 grandson. Joan is survived by her children: Harriet Nanini of Havre; Marcella Engle-Hargrove of Boise; Stanley (Bridgett) Sparks, Polson; Delvine Claridge, Virginia Beach; and Linda (Larry) Poore, Jacksonville, Florida. Other survivors include her sisters Avis (Bill) Groseclose, Margaret Leidle, Luella Brownlee, and brothers William (Sharon) Powell and Ted (Annette) Powell. 16 grandchildren, 13 great grandchildren, 3 great-great grandchildren and numerous nieces and nephews. She will be dearly missed by family and friends.