A Passion for Tsuba Results in a Book 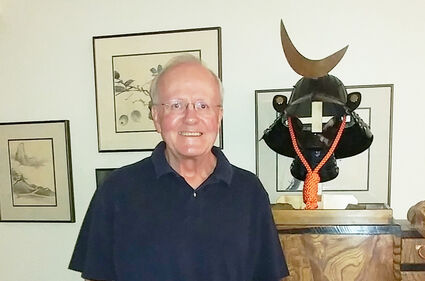 In the living room of his Colorado home, Jeff Harshman stands beside one of his samurai warrior helmets.

Most of us have a passion, something in which we find great satisfaction, pleasure, or fulfillment. For Chinook native M. Jeffrey Harshman, a retired school psychologist in Colorado Springs, that is the art of samurai sword guards, or tsuba. His passion runs so deeply that he has authored a book on the subject.

Published by Sweetgrass Books in Helena, Montana, The Art of Tsuba: The Montgomery Collection came out in paperback on June 18, 2021. About a sizeable collection of Japanese Samurai sword guards and its collector-the late Gary Montgomery-the book showcases the beauty of these antique art objects within the context of Japanese aesthetics, culture, mythology, legend, and Samurai history.

According to Harshman, Montgomery was a life-long collector and a founding member of the Colorado Token Kai Japanese Sword study group. The group's focus was the study, preservation, and collection of unique artifacts. Another long-time student and collector of Japanese Samurai Arms and Armor, Japanese Art and furniture-called tansu-chests-Harshman was a member of that study group for over 14 years and its last treasurer when it was still actively meeting. Additionally, he holds membership in the Japanese Sword Society of the United States and with other Japanese sword preservation and appreciation groups.

"Collecting is an esoteric subject," Harshman claims, and he invites readers to take a journey through the history and origins of the hundreds of artistically detailed Japanese samurai sword guards featured in his newly released book. On that journey, some of the mystery will unravel as readers come to understand a culture that values beauty and craftsmanship-which lends another perspective to these implements of defense.

Although Harshman does not consider himself a historian, his art book is steeped in history. "Samurai sword guards, or tsuba, reflect the rich history and artistic culture of the Japanese people, the warriors who wielded them as part of their weaponry and the achievement of the craftsmen who made them. This volume comprises the extraordinary tsuba collection of Gary Montgomery, who studied, documented, and curated his finds over half a century. Richly colored photographs of the tsuba; notes on origins, makers, and provenance; and detailed references make this book a must-have for collectors looking to improve their knowledge," Harshman said.

An avid reader with an extensive library of Japanese art, history, mythology, samurai sword and tsuba reference books and catalogs, Harshman grew his passion from childhood.

"As a child, I was interested in the legends and tales of King Arthur and the Knights of the Round Table. Samurai warriors are just a different kind of medieval knight," he stated. "I also had a fascination with dragons and mythology. Think about the legend of St. George and the dragon-that's a remarkable story of bravery by someone who wielded a sword."

He also told a story about his Chinook neighbors, Earl and Audrey Watson, who lived a half block from his family home and owned a pair of Samurai swords-the first he ever saw. "Earl fought in New Guinea, and these were military-standard World War II mounts.

Their son Jim and I played with these blades, wielding them to imitate warriors in battle."

His grandparents' bar, the Mint Bar on Chinook's main street, also featured a musket and samurai sword hanging above the back bar. Harshman recalls their presence even when his parents, Don and Mary Loraine eventually owned and worked the business.

Reflecting those childhood memories as well as an interest in the unique and mythical, today Harshman's living room is populated by Darth Vader-like décor. Harshman built racks to hold and display some of the helmets and suits of armor in his collection. Many of the items in that collection were acquired after Montgomery was diagnosed with cancer.

"I bought the bulk of Gary's sword guard collection with the intent of cataloging it. Montgomery had extensive research notes, and when I talked about my goal, he gave me written permission to use his name, photograph, research notes, tsuba photos, and biographical information in any form that I desired. The result is The Art of Tsuba: The Montgomery Collection," Harshman explained.

Although tsuba enhance the balance of a sword, the primary function of the metal tsuba is to protect the hand, either from sliding down upon the cutting edge of the weapon or from a sword cut delivered by an opponent.

Produced by metalworkers called tsuba-shi or tsuba-kô, the tsuba exhibit the work of skilled craftsmen. Influenced by underlying Shinto and Buddhist ideals, the tsuba-shi practiced their art within the native tradition of Japanese aesthetic values to document history and legend, as well as the degree to which nature was revered by the Japanese people.

The patina, texture, color, and heft make the tsuba examples of "amazing art" in Harshman's opinion. Not just objects of beauty, this art tells a story. "The samurai and merchants were privileged and wore dress and weaponry as a form of self-expression," Harshman states. "Their tsuba could have both functionality and also display all the symbolism, splendor, and luxury that the samurai or affluent merchant desired."

Since they were readily apparent, the sword guards would also send a signal to a potential opponent. Broken roof tiles on a tsuba, for example, would communicate that the warrior was like a tsunami-a destructive force of nature. A tsuba portraying peonies-the Queen of Flowers and a protector-might indicate that the Samurai was guarded by someone or something regal and powerful.

Sometimes the sword guards featured figures, like monks, warriors, and tengu-which are mystical creatures that dwell in the step forested mountains.

"Often described as human-like beings with the beak, wings, and eyes of a hawk but with the body, arms, and legs of a man, tengu are the dangerous yet protective spirits of the mountains and forests. They are also considered the guardians of the mysteries of the Martial Arts. Because of having this great knowledge in the art of skilled combat, they became associated with the legend of Minamoto Yoshitsune, the greatest samurai in Japanese history," writes Harshman.

Other times, the tsuba simply reveal the deep love and appreciation of nature held by the Japanese people. Pastoral scenes or those depicting chrysanthemums, hollyhock leaves, cherry blossoms, birds, butterflies, stylized waves, or flowers among vines were common. 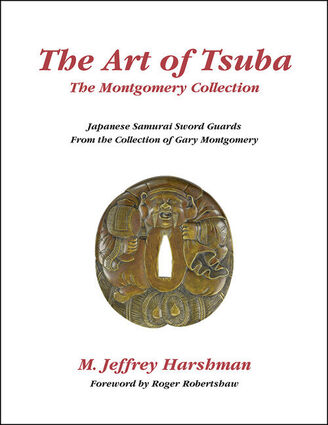 "Whether they were some part of nature like rocks, trees or flowers, or places or certain objects like a tool or weapon or an item of everyday use or even individual persons, the things most highly revered had an unusual uniqueness about them that made them stand out as singular in nature. Because of this unique singularity, they were viewed as Kami or as having Kami-a vital force that translates to 'beings placed higher,'" writes Harshman.