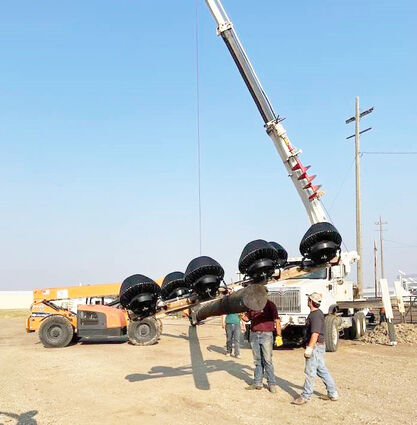 On July 15 and 16, crews were hard at work setting 85-foot utility poles for new arena lights at the Blaine County Fairgrounds. The project is a collaborative effort of several organizations and volunteers and will take approximately three weeks to complete.

According to Fair Board Vice President, Loren Skoyen, the workers were all volunteers. "Between the Fair Board members and the Red Rock and Outback boys, we had a pretty good crew," he stated.

The Blaine County Fair Foundation and the Bear Paw Roundup Rodeo organizations pooled their resources to replace lights that were over fifty years old. Twenty-four LED lights and six spot lights are being installed in the renovation.

"There just were too many shadows and dark areas," Skoyen reported. "We are going to light up the rodeo arena this year! Our Fair Board and rodeo committee have worked really hard to improve our arena each year. Now, we'll be able to see that last bull ride and our special events just as well as the first event of the night! Thanks to all who helped with this project. If it weren't for volunteers, nothing would ever get done!"

The poles were purchased through McFarland Cascade, a Stella Jones Company located in Billings; rock was secured from Baltrusch Construction out of Havre; Moxley Construction in Chinook delivered gravel; and Red Rock Power approved the use of their equipment during the production. The lights themselves came from a company in Salt Lake City. When all of the poles are set and the lights hung, Loch Electric in Havre will perform the wiring.

"We got a good deal from most of these businesses-some donated the materials and others gave us discounted prices because they help non-profit organizations," Skoyen explained.

When the project is complete, Skoyen said there would be a light party. "We'll light them up and position the arms and spots so that we eliminate any dark areas," he stated.