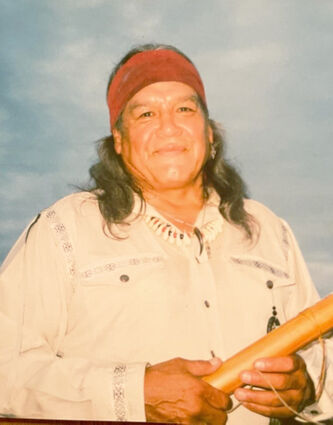 On July 16, Daryl "Twinboy" Shortman began his journey to his eternal resting place at Hays, Montana. Daryl was born, as a twin, on March 12, 1955 to Joe and Birdie Mae Shortman at Fort Belknap Agency. He grew up and spent most of his lifetime in Hays. He lived in New Mexico and Arizona and graduated from high school in Crownpoint, New Mexico.

Twinboy became a "wanderer" at an early age in Hays and continued this lifestyle for a majority of his life, as a free spirit. He lived his life by his terms and the way he wanted to live it, making many friends along the way. He lived a simple life and was always willing to help anyone in any way he could. He was a self-taught flute player and gladly shared his talent with everyone. He traveled with Montana musician Jack Gladstone and was very proud of the fact that he was asked to play at the State Capital. Twinboy played the guitar and loved to sing old country and western songs and hymns, his favorite being Waylon Jennings. Twinboy was a rodeo cowboy during his younger days and liked to reminisce about his days as a bull rider and bronc rider. Twinboy had a creative and artistic mind, evident in his poetry, songs, and art projects. He had a special place in his heart for animals and adopted many throughout his lifetime.

Daryl is survived by his sisters: Jolene and Arleda Shortman of Polson; Aloha Shortman and Pat Bear of Hays; his twin Cheryl Von Gulner of North Dakota; and Darlyne, Marcella, and Winona Shortman of Havre. He is survived by one brother, Leon Shortman, of St. Ignatius; paternal aunt, Elaine Small; and many, many cousins. Daryl was preceded in death by his son, Quincy Shortman, his parents, Joseph and Birdie Mae Shortman, brothers Donald, James, and Gary Shortman; one infant siser; uncles Buster and Benny Lodge; aunt Lilly Lodge. Daryl's extended relatives include the Carrywater, Lodge, Brockie, Gone, Talks Different, and Spotted Bird families to name a few.