Childcare and the Name Wanda Chilton Are Synonymous 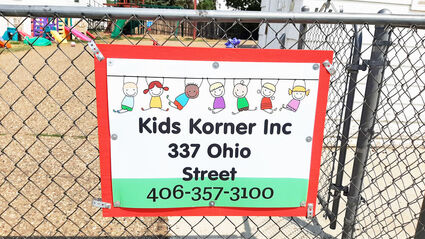 Since 1977, Wanda Chilton has been the woman behind childcare services at Kid's Korner in Chinook. When approached about an interview and a potential story for the newspaper, she replied in the affirmative but stated, "No pictures; I hate pictures."

Chilton's efforts to divert the topic from herself several times during the interview provide a testament to her selflessness. She has no taste for the limelight; she's about touching lives.

"I spend more waking hours with these children in their early years than many of their parents do," she said. "I teach them many things, from table manners to the importance of eating vegetables like cauliflower and broccoli. Not a day goes by that I don't get complimented for my cooking. One child told his mother that 'no one makes toast like Wanda,' and while it's just butter on a piece of toasted bread, it's how it is presented. I want these children to feel special."

In a typical day, Kid's Korner can have up to 28 children, a number which may include up to eight babies. "We're licensed for 28 total, so that number includes infants," Chilton clarified. Depending on their numbers, the facility is then staffed with lead and assistant teachers to meet the required ratio.

In Montana, the child-to-staff ratio and maximum group size for a child care center are

a) 4:1 for children newborn through 23 months with a maximum group size of 12;

b) 8:1 for children two years through three years with a maximum group size of 16;

The Administrative Rule, as provided by the Secretary of State's Office, goes on to indicate that if children of different ages are mixed, the ratio and group size for the youngest child in the group must be maintained.

Regarding meal regulations, breakfast, lunch, and snacks at Kid's Korner are all governed by the Helena-based, federal Child and Adult Care Food Program (CACFP). "We follow CACFP guidelines to ensure that the children have access to nutritious meals and snacks. There aren't any boxed meals, here," Chilton stated.

When asked what has kept her in the childcare game for so long, Chilton explained, "Once I get one child through, another one comes along that I grow fond of and want to share time with. And on it goes. I should write a book."

Chilton confessed that she used to keep records of all of the children and memories she shared with them, but she eventually threw the pages away. "Who would read it? These are memories precious to me but perhaps not of interest to someone else," she said.

The children themselves remember their caregiver, though, proving that the connections Chilton makes are lasting ones. She has received invitations to graduations, weddings, and baby showers. "Some even bring by their own children and share them with me."

Over the years, Chilton has seen lots of change-not only in child behavior but in regulations. "A person almost needs a lawyer to read and interpret all the current rules and regulations. We used to be able to transport kids, but with seat belt laws and for other liability and insurance reasons, we can no longer do that. The library even comes to us for reading time."

Even though change is hard and meeting regulations poses a challenge, some of them are in the name of safety. "We have a fenced play yard now, and the doors are always locked. Parents are provided a code to enter. Originally, I didn't like that locked door, but I do now," Chilton confessed. "We never know who might just walk in off the street."

Other regulations include fire inspections, license verifications, and training requirements. "There's lots of training," Chilton acknowledged. "I still have to take sixteen hours of training a year, as well as stay current on my CPR and First Aid Certification." Chilton reported having to use that training to save a baby once.

In a job that requires constant vigilance, Chilton admits that she worries all the time. "They're like my own," she said. "And their antics often make me smile. Just the other day, a little boy was marching about the room, repeating in a deep voice, 'I'm the boss. I'm the boss.'"

Housed in the basement of the United Methodist Church in Chinook, Kid's Korner recently underwent some facility upgrades. These include new carpet, flooring, and exit lights.

After forty-four years, Chilton shows no signs of retirement. "I'm not one for sitting at home," she chuckled. "Closing because of COVID was one of the hardest times of my life."

Even in the wintertime when the roads are nearly impassable, Chilton makes the ten-mile trip to town from her home near Zurich in case a parent needs a childcare provider. As one of the brave and faithful, she wants to be available. "I'll probably be working here until I die," declared Chilton.

And when the days grow stressful and the regulations seem impossible, or the weather makes people crazy, the 'I love you's' make her job worthwhile.