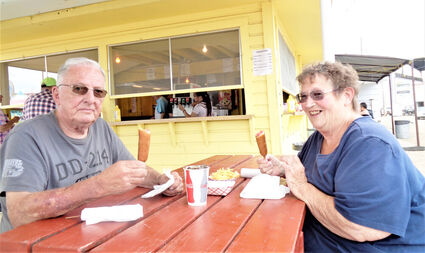 Correspondent's note: Alert readers may recall a story I wrote in 2016 about food booths at the Blaine County Fair. I researched and wrote the story after I worked my first time ever in a fair booth. I was curious about how the booths operated, what kinds of revenue they generated and how that revenue was used. Turns out there's a lot more involved with food fair booths than simply opening the doors (or, raising the covering over the serving windows) and taking in money. Here's an update on local fair food booths, the important role they have in the local community and some of the challenges to opening and operating a fair food booth.

Income from the fair food booths stays in the community

Fair booth income stays in the community to support local programs, mainly youth related activities. It's safe to say that local youth activity, except those exclusively supported by local schools, churches or their own support group, benefits in some way from the food booths at the fair. Youth programs supported by food booths include scholarships for graduating Chinook High seniors, help with travel expenses for students making the annual trip to Washington, DC, underwriting the annual visit by the Missoula Children's Theater, support for the local Swim Team and other activities.

Some funds go back in to maintaining and expanding the local infrastructure. Maintenance funds for certain local parks comes from sales at a food booth. Other groups use part of the income from their booth to provide or maintain space for their activities. Monies also go back for special projects related to beautifying the community and the fairgrounds, providing flags for special holidays and Veterans' Day celebrations, sending students to Boys and Girls State and buying books and special materials for children at a local pre-school.

The run up to the 2020 fair was "steady by jerks." At one point rulings related to protecting the public during the pandemic nearly halted the fair. Then a new plan provided a way to have a fair in 2020 and still protect fairgoers. In 2020 there was a 4-H fair, two nights of the PRCA Bear Paw Roundup Rodeo with entertainment and a music show on Saturday night. Other major events at the grandstand were cancelled planned midway carnival back out. Most regular food booths did not open for the fair.

For many area community and youth organizations their fair food booth is their only fundraiser during the year.

During the 2016 fair the amount raised was around $45,000 for the eight organizations that operated a booth during that fair. Fortunately (or, unfortunately) nearly all the events supported by monies from the food booths were curtailed or cancelled due to COVID. In some ways the year was a wash-very little money raised at fair food booths and most activities receiving the funds didn't operate. The 2021 income from the food booths is expected to be back closer to normal years.

The challenges of operating a food booth

Most of the food booths are freestanding structures, though some (like the FFA's booth) are incorporated into a fairground structure. Recognizing how the booths provide support to local programs, the fair board prohibits outside food vendors unless that vendor is part of a contract with a carnival that serves the fair. Once a booth is constructed it is owned by the fair board and the groups using the stands maintain them.

With no fair last year, many booths are facing some abnormal issues with getting booths ready this year. Challenges range from refrigeration equipment not working to busy gophers digging under foundations and patio areas. Some of the booths have been in place since the fairgrounds moved to its present location in the mid to late 1950's. The age of the facilities results in numerous challenges to get things repaired and ready to open.

The largest challenge is finding a sufficient number of volunteers to operate each booth. The size of the 'volunteer pool' is a limited. During fair many potential food booth workers are also involved with other volunteer jobs at the fair-helping with 4-H competitions, working with the Bear Paw Roundup, manning an information booth in the Commercial Building or already working another food booth.

Many volunteers work at more than one booth during the fair. Parents with kids in 4-H may work at the Chuck Wagon, then do a shift at the Lions booth to 'play it forward' for the Swim Team. Sometimes youngsters, or their parents, who benefited from support by a group work a 'pay back' shift or two at a food booth.

These food booths at the Blaine County fairgrounds are silent now but will be humming shortly when fairgoers show up for their annual selections of fair food. Fair food does more than feed hungry fairgoers. Money earned at the food booths helps support many activities, especially for youth in the area. For several community organizations the food booth is their only fundraiser to support their programming throughout the year.

Several stand coordinators said they needed about 50 volunteers to cover all the shifts they were open. Some groups start nailing down volunteers weeks before the fair. One veteran recruiter said, "We used to try to get people signed up weeks in advance. We learned busy people can't say what their availability will be in the future. Now I wait until just a few days before the fair, then begin calling."

Another group of volunteers never seen in the booths are the folks who donate or make food sold in the booths. Both the 4-H and Veterans of Foreign Wars booths, particularly, rely on a lot of homemade pies and those come from members and supporters working from home. Thankfully there's also a cadre of people who like to work during the fair for the social aspects. As one put it, "I like to work the fair booths because I see so many people I don't normally see."

There are folks, thankfully, whose sole purpose for coming to the fair is to enjoy the fair food. Customers often show up carrying a basket or box, stopping at each stand to buy fair food to have on hand for visitors, to feed family attending or working the fair and "to help support all the programs these clubs and groups support in our community." That's when "fair food" really becomes "helpful food." Thanks to all the volunteers who make fair food such an enjoyable experience and help support so many community programs.