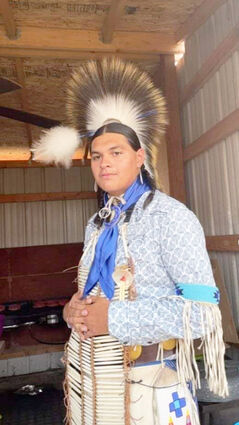 On the peaceful night of August 1, 2021 LoyGene "Canúba Sabá" Molina was called home to the spirit world. Loy was born on the sunny spring morning of April 15, 2003 to Lionel Molina and Gina Rae Helgeson.

LoyGene had an old soul from the time he was a toddler, you could often hear an Inkdomi story being told by a 4 year old Loy. Throughout LoyGene's toddler years he became especially close with his Grandmother Florence, the start of a lifelong best friendship.

LoyGene's educational journey began at Three Strikes Head Start in Lodgepole, MT. He attended Lodgepole Elementary until the end of 3rd grade spending 4th and 5th grades in Harlem Elementary. In the 6th grade LoyGene returned to Lodgepole finishing his Jr. High and High school years at Hays Lodgepole Jr/Sr High School. LoyGene was a part of the 2021 Hays Lodgepole High School graduating class. LoyGene participated in and found enjoyment in football, track and speech and debate while in high school. LoyGene was the 2018 Class C speech and debate state champion. In 2019 Loy completed the Yellowstone Youth Corp Camp.

LoyGene was described as having a kind, loving heart; this proved to be true as he left each of us better than he found us. LoyGene's sanctuary was his grandparents Gus and Florence's house down the coulee where he could almost always be found, hanging out with the old folks and Weez the cat.

At the young age of 18 LoyGene held so much wisdom, he wasn't a man of many words but when he did speak you could expect to laugh or learn something new. LoyGene carried himself in the most humblest of ways, shining his light everywhere he went. Of all the things LoyGene was in this this life; he took the most pride in being Nakoda. LoyGene's true enjoyment came from attending ceremonies with all those he called family. June of 2021 LoyGene completed his first year of dancing in the Big Lodge. LoyGene held many things close to his heart including his family, his culture and his way of life.

At the time of his passing LoyGene was employed at Red Paint Creek and enrolled at Aaniiih Nakoda College, chasing his dreams of becoming a Park Ranger; he was truly one with nature.