Pine Grove Fire at 16,004 Acres - 58% Contained as of Monday Morning, Evacuation Warnings May be Lifted 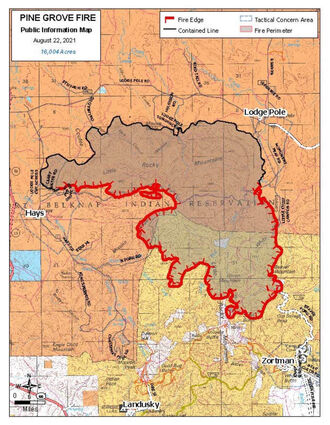 The diagram on the left shows the containment of the fire as of Sunday night, August 22.

As of Monday morning, August 23 the Pine Grove Fire located on the Fort Belknap Indian Reservation in Blaine and Phillips Counties was listed as 58% contained with 16,004 acres burned.

The fire was first reported by Fort Belknap Law Enforcement just before Noon on Monday, August 16 as a large fire on the Carrywater Hill area with nearby homes being evacuated.

The fire grew rapidly with early estimates being north of 20,000 acres burned in just 24 hours. The smoke cover and fast moving fire made it difficult to accurately map the area.

By Friday August 20 the massive fire was being referred to as the Pine Grove Fire with an estimated 17,325 acres burned and 19% contained.

The Montana Department of Natural Resources and Conservation (DNRC) as well as the County Assist Team (CAT) were on scene.

There had been mandatory door to door evacuations in the communities of Zortman and Landusky as well as warnings in the Hays and Lodge Pole Communities. However cooler temperatures and much needed rain fall allowed firefighters to take advantage of the conditions.

At that time Evacuations Warnings in the communities of Zortman, Landusky, Pine Grove, Star Hill and Lodge Pole were left in place with residents being allowed to return to their homes but were reminded to be in a Ready State to evacuate if fire conditions deteriorate.

The Mission Canyon, White Cow Canyon and Coming Day roads and the roads going to Camp Creek Campground and Wiccum Cabin were closed to all non-essential traffic.

These conditions remained through Sunday evening. The reduced number in acreage burned came as a result of better ground truthing and aerial reconnaissance.

As of Sunday night fire fighters continued to work on establishing fire boundaries and containment lines. A statement from the Incident Command team stated, "A helicopter performed bucket drops to address some of the less accessible areas with remaining heat. White Horse Canyon south to Scraggy Peak was cold trailed and lined, where needed. Work also occurred in the Monument Peak and Mission Ridge areas." 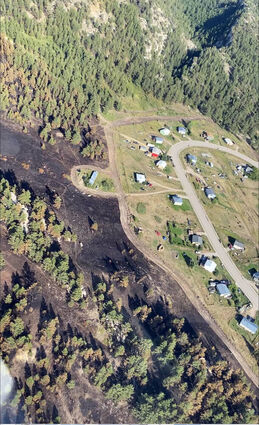 The photo on the right was taken by Warren Morin while he got a flight over the fire, the photo shows the Pine Grove fire line.

As of Monday morning there were 11 structures burned and 187 personnel were on scene including two twenty person hand crews and nine engines. a infrared flight showed minimal heat signatures coming from the interior of the fire area.

Authorities were set to discuss the need to continue evacuation warnings in the communities of Zortman, Landusky, Pine Grove, Star Hill and Lodge Pole. Any change would be passed on to the public later Monday afternoon.

Don Pyrah, Patrick Lonergan is the incident Commander. According to the Pine Grove Information website, https://inciweb.nwcg.gov/incident/7812/ containment is estimated to come on Saturday August 28 at approximately 7:00 p.m.

The Fort Belknap Tribe is accepting donations to support those impacted by the fire. Please drop supplies at the Kills at Night Center in Hays, MT. Contact Maggie Werk with questions at 406-301-4583.