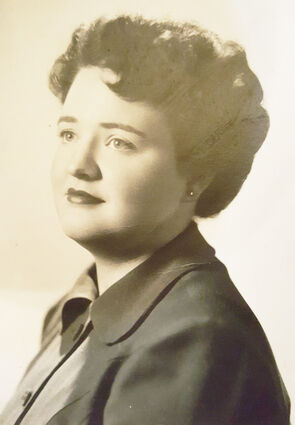 Molly Jo was born to James B. and Ester G. Spencer on August 3, 1932, at Fort Belknap Hospital.

Growing up she lived on the Spencer Ranch near Cleveland, Montana and attended schools in Dodson, Chinook, and Hays depending on who she could board with that year.

Molly Jo loved Ranching and taking care of animals. She and her beloved sister Sally Ann would care for orphaned wild animals that the ranch hands would bring them, including a skunk and a coyote.

Molly Jo stayed with her grandmother Rosie Stevens when attending school in Dodson. After graduating High School, she attended the College of Great Falls for 2 years, then returned to work for her parents at the Spencer Ranch south of Chinook until eventually moving to Dodson to work at the Highway Bar for her best friend and future sister-in-law Helen (Minugh) Dvorshak and Wally Dvorshak.

She worked at the Hi-Way Bar for 8 years until she "found her love", Al Minugh, and they were married on November 20, 1967, in Bonners Ferry, Idaho while traveling through between Montana and Washington.

Molly had a big heart with a good capacity for love and in 1970 took in two of Al's children, Mac and Dawn, and was a wonderful stepmother to them. Then in 1972, she took in one more of Al's children, Julia. They will always be grateful for all she did for them and for letting them enjoy being a part of her life.

A humble woman, she didn't like to be in the spotlight. She was hard-working, fun-loving, highly intelligent and would attempt anything. She also really liked her cars. She was one of the first people to own a 1965 Ford Mustang in the fall of 1964 and was likely the first person in Phillips County to own a fully electric car. In her later years, Molly enjoyed playing cards, working crossword puzzles, watching Perry Mason and Jeopardy, and had an amazing collection of hats.

She will be dearly missed by all of us who were touched by her love.