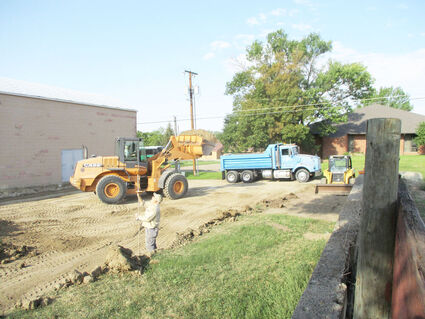 This photo, looking from Indiana Street toward the north wall of the Wildlife Museum, shows the excavation being made for the new addition to the local museum in Chinook. Dave Taylor, a former member of the museum board, provided the excavation equipment and dump truck to remove fill for the footings for the building. Ken Schubert, in foreground, and Roger Jergeson, driving dump truck, are both current museum board members and were helping with site prep work.

"Journal" readers may have seen the earthmoving equipment working along the north side of the Blaine County Wildlife Museum. That activity is part of the site preparation for a new addition to the existing wildlife museum. The addition was made possible through the generosity of the Brown-Monson Foundation based in New Hampshire. Here's some of the background of the museum, the gift and how the new addition will be used.

A short history of the Blaine County Wildlife Museum

The idea for a wildlife museum in Chinook first began with local resident Bill Harbolt when he learned the Blaine Bank of Montana was foreclosing on the old Blaine Theater building. At the time there was no wildlife museum along the Hi-Line. Harbolt shared his idea for a museum with Scott MacKenzie, a Chinook-based attorney and local history enthusiast. Mackenzie was also enthused about the concept. In 1991 the bank donated the building for use as a wildlife museum and a local group of volunteers began working to develop the new museum.

The goal was to create a museum where Montana animals would be exhibited in their natural habitat. The first few years were hard going. According to Harbolt, the only original board member still active on the current board (Scott MacKenzie who died in the fall of 2020 was also one of the original board members), the first few years were devoted to improving and modifying the building to convert it from a movie theater with seats, a balcony, movie screen and a slanted floor, in to a usable space to house a museum. Early on there were minimal animals available to display.

In 1997 the group bought animals at auction from a museum that closed in Livingston. As word spread about the new museum, other complete animals were donated or made available. The first major exhibition, the Buffalo Jump, was completed in 2001. With quality exhibitions costing $1,000 per square foot, the group began submitting grant proposals to pay for that first exhibit. Harbolt said, "After three tries we were successful with a grant from the Montana Department of Tourism." He noted that once people saw the new exhibition of animals in a natural setting enthusiasm and financial support for the museum grew. It also became easier to secure funding from donors and to receive state grants. Four state tourism grants followed over the years.

In 2017 the Foothills Exhibit was completed. It was the last of the major exhibits planned for the existing museum. The Alcorn Exhibit group, Kurt Wohnsen and his wife Liz Marshall, created all the major exhibits at the museum. The designers announced the Foothills Exhibit would be their last as they planned to retire. Over a fifteen year period the designers helped fulfill the museum's goal of presenting exhibits of Montana's animals in natural settings.

Fundraising was still an important part of operating and developing the museum. Over the years the annual banquet and an added rifle raffle have enjoyed increasing success. The "adopt an animal in the museum" program gave folks the opportunity to financially support the museum by adopting an animal on display. Harbolt said nearly all the currently eligible animals are adopted. And animals that could be used in future exhibits were increasingly donated or made available from state and federal wildlife agencies, private collections, regional residents and from other sources

The new Brown-Monson Wing at the Wildlife Museum

About the same time the last major exhibit was completed, John Monson, a resident of New Hampshire and avid sportsman who has hunted all over the world, purchased land in south Blaine County. A local resident told Monson about the work of the museum and a contact was made that resulted in the offer of a sizeable gift to the museum through the Brown-Monson Foundation. That gift of a quarter million dollars will be used to fund the current construction of the new addition.

The new addition will be attached to the north wall of the existing museum. The 45 by 100 foot metal building is described as a 'shell' in which new exhibits will eventually be created. The addition will be accessed from the existing museum. The new front will be set back 25 feet from the sidewalk along Indiana Street with another setback from the alley to allow deliveries and access to the rear. 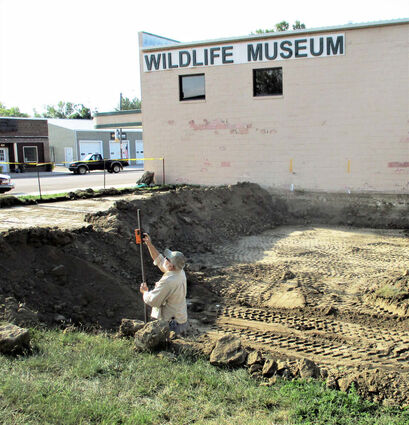 This photo looking southeast toward the front of the Wildlife Museum shows the depth of the excavation to prepare the site for a new addition to the museum on Indiana Street in Chinook. Ken Schubert, standing in the excavated area, was taking measurements for fill removal.

There are tentative plans for the first exhibits to be created in the new space. A 'spring exhibit' will feature baby animals. Many school groups visit the museum and Harbolt said he believes the kids will especially enjoy seeing the baby animals. He added, "We have several infant specimens that are not currently exhibited." Another new exhibit will feature a Missouri River scene. Harbolt described it as, "Much like the Wetlands Exhibit currently on display." And a third planned exhibit will feature bees. In the future some of John Monson's North American animal mounts will be added but there are no plans to display animals from other continents.

With the retirement of the former exhibit creators an immediate challenge is to find a new group to create the exhibits. And there is the matter of fundraising to fund the new exhibits. Harbolt, who has been involved in the 30-year development of the wildlife museum, is optimistic about meeting both challenges. He believes a new exhibit design team can be found and added, "Folks from all over have supported the museum and helped it develop in to the success it has become. I believe that support will continue and that new supporters will step us as well."

For the months of September and October 2021, the open hours for the wildlife museum have been extended to 12N to 5pm, Monday through Friday. Learn more about the Wildlife Museum by going to the museum's website at: bcwildifemuseum.com. To discover ways you can support the programs of the museum, call the museum office at 406-357-3102 or email to: wildlifemuseum@gmail.com