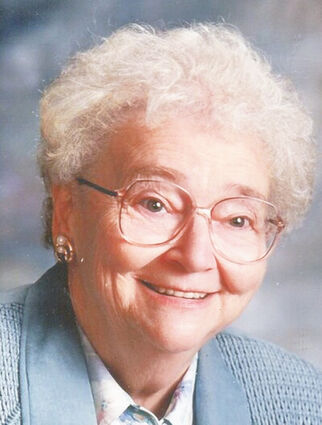 Hattie Marie Bretzke, age 95, passed away due to natural causes at Sweet Memorial Nursing Home on Saturday, August 21, 2021. Funeral services were held at 11:00 a.m. on Thursday, August 26, 2021, at Holland & Bonine Funeral Chapel, with burial to follow in Highland Cemetery. Hattie's family has suggested memorial donations be made in her memory to Sweet Memorial Nursing Home for the Employee Appreciation Fund or to the charity of the donor's choice. Holland & Bonine Funeral Home has been entrusted with services and arrangements. Please visit Hattie's online memorial page and leave a message of condolence for her family at http://www.hollandbonine.com.

Hattie was born on July 21, 1926, in Harlem, Montana, to Leonard and Stella (Lewellen) Fouts. She was raised on farms outside Nashua and Turner, attending school and working in her father's store in Nashua. On October 24, 1945, Hattie married Richard "Bud" A. Bretzke in Glasgow, MT, and the couple had eight children. They farmed for a few years outside of Glasgow, and moved to Havre in 1955, where Hattie raised the children while Richard worked at the Post Office. In the 1960's, Hattie began working as a nurse's aid for the Sixth Avenue Rest Home, and Deaconess and Northern Montana Hospitals, retiring from Northern Montana Hospital in 1982. After retirement, she babysat in her home for several years. Many of the children she cared for were children of nurses she worked with.

Hattie was a kind, loving woman who loved her flowers, quilting, needlework, crocheting, and drives in the country. She traveled extensively in her later years, visiting family from coast to coast, often with her cousin, Grace DeSaye. She was proud of surviving COVID 19 during the Fall of 2020. Her family was her world, and she made each grandchild feel as though they were her 'favorite'.

Hattie's family would like to thank April Custer at the Care and Comfort Home in Havre for the care they provided before she moved to the Sweet Home in Chinook in January of 2020. A very sincere thank you to the staff at Sweet Memorial Nursing Home for the loving care Hattie received.