'Beeters Storm Back to Thump Park City 40-24, Take on Shelby This Friday 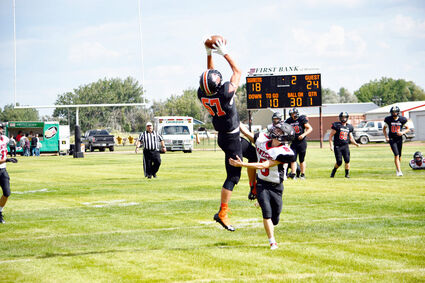 Chinook senior Toby Niederegger high points the ball, hauling in a spectacular 30 yard touchdown pass from Junior quarterback Levi Jensen as time expired in the first half. The two connected again for the two-point conversion giving the 'Beeters a 26-24 lead heading into halftime.

The Chinook Sugarbeeters began their 2021 Eight-player football season this past Saturday when they welcomed the Park City Panthers to town. The game was a non-conference tilt, which normally wouldn't carry much weight, but this was an early season battle between two teams with high expectations.

The Panthers arrived in town as a popular favorite among statewide media to be playing for the state title in November. They left town with a 0-1 record after the Sugarbeeters turned a second quarter 24-12 deficit into a convincing 40-24 win.

The 'Beeters opened the 2021 season by allowing the Par...