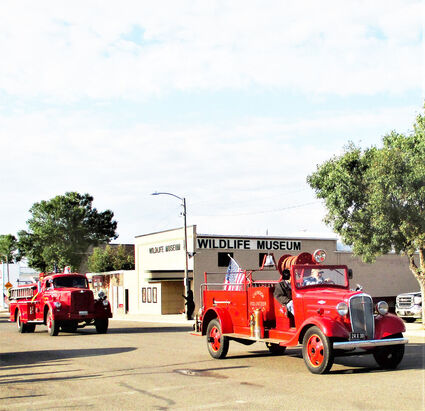 Chinook's vintage 1936 fire truck led the 9/11 memorial parade held last Saturday in Chinook. At its monthly meeting members of Chinook's volunteer fire department decided to host the parade and invited other local responders to participate. It's believed more than 300 firemen died in the attacks 20 years ago.

The sound of emergency sirens sounded in Chinook last Saturday on September 11. Local first responders participated in the commemorative parade to honor first responders and civilians who died or were injured 20 years ago in the terrorist attacks around the nation. Chinook Fire Chief Kraig Hansen explained how the local event became a reality.

Chief Hansen said, "I saw on social media that several groups of first responders around the country were organizing low-key memorials for the 9/11 attacks. I discussed the idea of doing one locally with a few people and brought it up at our monthly meeting of the Chinook Fire Department Volunteers. The firefighters were for the idea so we invited other local responders to participate as well." While the number of deaths is not definitively known, almost 400 of the roughly 3000 victims of the attacks were first responders.

The parade started at the south end of Indiana Street in Chinook. Heading north the line of vehicles passed through downtown, turned west on Highway 2 for a block, then proceeded back south on Pennsylvania Street, passed in front of the post office and continued south on Indiana. Emergency sirens and horns could be heard in the quiet morning. Then, heading back south, the parade was purposefully silent. According to Hansen there were 10 fire trucks, two ambulances, a Chinook police car and several Blaine County Sheriff's deputies in the parade.

The memorial parade started at 8:45am. Chief Hansen said, "We started the parade at 8:45am, the time the first plane hit the Twin Towers in New York City twenty years ago." He added, "To commemorate the exact time on the east coast we would have had to start at 6:45am here. That seemed inappropriate on what would normally be a quiet Saturday morning in Chinook."

While the event was not widely publicized, it was posted on the Chinook Fire Department's Facebook page. The post read: "We are going to light up the streets and make some noise in remembrance and honor of 9/11. Please come out and show your support for the 20th Anniversary of the tragic events that occurred on 9/11/2001." Apparently the word did get out as several spectators respectfully stood on the streets as the local first responders moved by in the memorial parade.