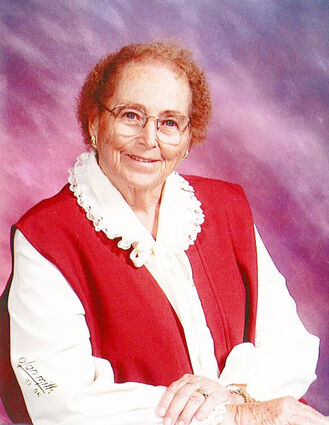 Dorris Minnie Hamilton was born on December 14, 1930 to Herman W and Grace V (Hutchinson) Friede in Harlem, MT and was raised in the Paradise Valley near Zurich, MT on her folk's farm.

Living on the family farm, she attended the North Fork, Zurich schools and graduated from Chinook High School with the Class of 1949. She went on to attend one year of Nursing School at the Sacred Heart Hospital in Havre, MT in 1949 and 1950.

She married John M Hamilton, a high school classmate, in her folk's home on November 3, 1940. To this union six children were born – Ivan, Claude, Alan, Darlynn, Mark, and Darin. In addition, their door was opened to many other children during their 51 years together.

Dorris was involved in many of her children's activities as well numerous local organizations and her church. She was known as a pretty good cook contributing to many holiday and family gatherings with fresh rolls and homemade pies. She and John were members of the Blue Horizon Camping Chapter of the Good Sam Club where they enjoyed camping and traveling with friends and made a couple of trips to southern Arizona in their motorhome to escape the Montana winters.

She was preceded in death by her husband John, her parents Herman and Grace, sister Phyllis, brothers Earl and Ross, and foster brother Dennis Galer.

A full obituary can be seen at the Wilderness Funeral Homes web site (https://www.wildernessfuneralhomes.com/)