'Beeters Improve to 3-0, Score Early and Often in 44-6 Win Over the Harlem Wildcats 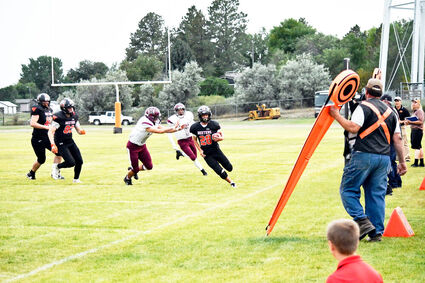 Sugarbeeter freshman Landen Beck gets to the edge for a good gain during second quarter action Friday night against the Wildcats.

The last time the Chinook Sugarbeeters and Harlem Wildcats met on the football field for a Varsity contest was way back in 2003 when both schools were part of the Northern B. This past Friday, on a beautiful night at Hoon field, the two schools met again, this time as members of the Northern C Eight-player division.

The Sugarbeeters have got off to a blistering start, winning their first two contests in impressive fashion over a pair of quality football teams. The Harlem Wildcats have been shorthanded, but getting stronger each day. The Wildcats are doing their best to adjust to the Eight-p...