Lady Cats Drop a Pair to North County and Glasgow 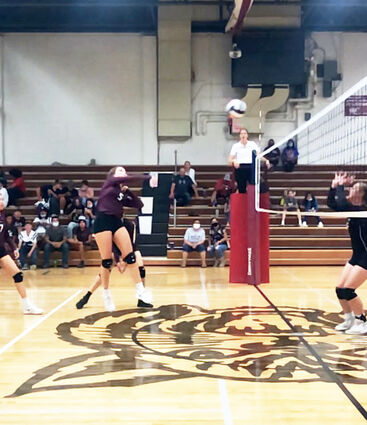 The Harlem Lady Cats were back in action this past Thursday playing in front of the home town fans as they welcomed the North Country Mavericks to town.

The Mavericks are a quality team out of the District 3C representing the towns of Saco, Hinsdale and Whitewater. The Mavericks went on the attack early and never looked back in winning the opening set 25-16.

Harlem Head Coach Kim Faulkinberry addressed her teams issues, "North Country served the ball well and we were out sized up front. We played well at times but couldn't put together any sort of consistency."

The Wildcats finished the match with 14 Kills on the night led by junior Ma'Lea Moore and sophomore Emma Billmayer each with three. As a team the Lady Cats had 32 digs. Senior Jessica King led the team with seven while senior Taya Trottier had six. Senior Vanise Little lead the team with two blocks.

Saturday the Lady Cats were in Glasgow to take on the Scotties in the District 2B season opener for Harlem. The Scotties always are a tough team and Saturday was no different.

Harlem could not keep pace with the Scotties relentless attack. Glasgow jumped out to an early lead in set number one and cruised to a 25-11 opening set win over the Lady Cats. Set number two was mirror image of the first set with the Lady Cats never being able to start a rally. Glasgow took set number two 25-13.

The Lady Cats continued to work on their attack and it paid off from time to time, but in the end it was Glasgow closing out Harlem with a 25-16 third set win to sweep the Lady Cats 3-0.

"Glasgow served the heck out of us with 22 aces," said Faulkinberry. "It is really hard to get anything going if we can't get a pass to our setter. When we did pass well, we had 17 kills. We would play with them for a bit then let them go on runs at the serving line. We will be spending a lot of time with serve receive this week."

Senior Chloe Messerly lead the team in Kills with six in the match. Senior Vanise Little set up the hitters with seven Assists on the night. Defensively, King led the team in digs with 10 while also serving up five Aces in the contest.

The Lady Cats will be back in action Friday when they will host the Malta M-ettes in a District 2B clash. Saturday Harlem will head out on the road to take on the Rocky Boy Morning Stars of the District 1B.