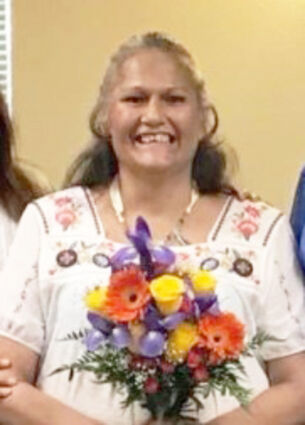 Brenda Lea (Sears) Doney, 57, of Havre, passed away peacefully at her home on Sunday, September 12, 2021, with her adoring husband at her side. She was born on August 13, 1964, in Maywood, California to Verner Wayne and Elaine Teresa (Bear) Sears. She was the granddaughter of Andrew and Miriam Sears and George and Lucy Bear.

Brenda grew up in Maywood, just outside of Los Angeles, until her family moved to Wolf Point. There she attended school and was a member of the Wolf Point graduating class of 1982. She held numerous jobs in her community, spending many years as the friendly grocery store clerk at Albertsons.

In June of 2001, Brenda met the love of her life, David Doney, Sr. Theirs was truly a love-at-first-sight romance story, filling her life with exceeding happiness and joy. They made their home together and with David's steadfast encouragement and support, Brenda was able to accomplish her dream of obtaining her college degree. She graduated from Rocky Mountain College with her Bachelor of Science degree in Elementary Education. The two were married in Havre on June 16, 2018, surrounded by family and friends.

Brenda appreciated nature and the outdoors. You could catch her fishing in the warm months or enjoying a good renovation project on HGTV year-round. She was a woman of faith, who found comfort, especially near the end, in the gospel hymns playing on the television in the background. The most defining characteristic of Brenda though, was her distinctive laugh. She could light up a room with her smile and have everyone laughing right along with her. She will be dearly missed by all whose lives were touched by her kindness.

Preceding Brenda in death were her parents, Verner Wayne and Elaine Sears; her sister, Andrea Sears; her brother-in-law, Frankie Toves; and her sister-in-law, Reva Sears.

A wake for Brenda was held Tuesday, September 14, 2021, from 6 PM-9 PM at Wilderness Funeral Home, 500 Indiana Street, Chinook, MT. The funeral service was held Wednesday, September 15, 2021, at the Fort Belknap Community Center at 11 AM, immediately followed by the committal service in Harlem Cemetery.

The family would like to extend a special thank you to Dr. Kevin Harada and the staff of Bear Paw Hospice for their kind and compassionate care.