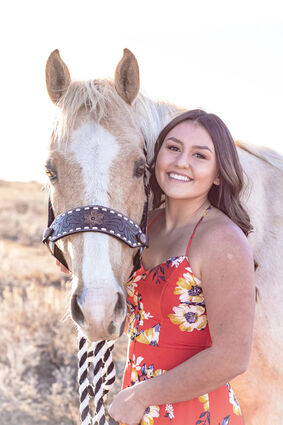 Our beloved daughter, sister, granddaughter, niece, auntie, cousin, and friend began her journey on September 24, 2021. Hailey Rose Bell was born to William "Bill" and Courtney Bell on November 13, 2002 in Havre, Montana. She carries the Nakoda name of Maxbiya Sha Wiya or in English, "Red Sky Woman". Her grandparents are Signa "Dodie" Bell, Amos First Raised, and Dan and Sandy McNeill.

Hailey attended school in Harlem and Chinook Schools and was a 2021 graduate of Chinook High School. She was a very accomplished and active young woman. Hailey saw a lot of success in rodeo. She was a highly decorated member of the Wasay Wakpa Rodeo Association and won events all through the state. She was an accurate shooter, qualifying for the Cinch Junior High shooting team at the national level. She left her mark on multiple activities including Blaine County Knights Football, 406 North Volleyball Club, Chinook AAU Wrestling Club and Chinook Sugarbeeter basketball, volleyball, and golf. Volleyball brought her many honors, including All-Conference and All-State awards, District Championships, top 3 team finishes at Divisionals, and a recent invitation to Hawaii for an elite volleyball event where she made even more friends and memories. Hailey was a fierce competitor who understood that celebration was a key part of the game. These memories she made with her family, friends, and teammates though these activities are sustaining us here while our dear girl journeys.

Hailey's life was full and there is no way to list everything Hailey loved, or all who love her. Central to her life here were horses and riding, hunting, brandings, being with her people, music, and dancing. She would catch you with her bright smile and the twinkle in her eyes and then follow with a perfectly timed one-liner, expression, or gesture (often caught on camera). She drove fast, laughed contagiously loud and hated to lose. Hailey wasn't afraid to argue a point or stand up for her ways, even when that meant standing alone. When Hailey loved you, you knew it because you felt it. Her heart was so big, and her love bigger. She used it to connect with people from all walks of life, she didn't have a group of friends she has friends in all groups. Her absence will be felt everywhere and perpetually at brandings all through our area as she was a most reliable hand.

She is survived by her parents Bill and Courtney Bell, sister Mariah Bell of Havre and brothers Derek (Stella Rigg) Bell and Ryan Bell both of Chinook, Grandparents Signa "Dodie" Bell of Lodge Pole, Amos First Raised of New Town Fort Belknap, and Dan and Sandy McNeill of Chinook. Also surviving her are her Uncles Daniel First Raised, Roy Lee Fox, Josh Beaumont and Shawn Bigler and her Aunties Dianna First Raised, Karessa Fox, Jamie Beaumont and Avis Ball. She is also survived by more cousins and friends than can be counted. She is preceded in death by Uncles Maxibya Yat Gan Bell, Amos First Raised III, and Brent McNeill and Auntie Melvina First Raised.

Wake and Services held September 26 and 27, 2021 at the Bell Ranch, Chinook, Montana, burial to follow at Little Chief Hill in Lodge Pole, Montana.