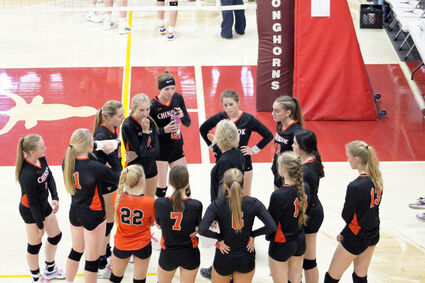 The Chinook Sugarbeeter Volleyball team gathers around Head Coach, Paula Molyneaux during a break in the action Saturday at the Fort Benton Mid-season Tournament.

The Chinook Sugarbeeters added to their three match winning streak with a sweep of the Big Sandy Pioneers on the road last Tuesday. Friday the 'Beeters were at home to take on the visiting Hays/Lodge Pole Thunderbirds where they again earned a 3-0 match win. Friday Chinook traveled to Fort Benton to take part in the Annual Longhorn Mid-season Tournament.

The 'Beeters swept the Pioneers early in the season and had no problem turning back the Pioneers the second time around. Chinook wasted little time in securing a first set win, dispatching the Pioneers 25-14.

Big Sandy had a bit more fight in their game come set number two, matching Chinook point for point. the 'Beeters in the end recorded the final point of a 25-23 second set win.

Chinook managed to complete the sweep in set number three with a 25-22 win, but the Pioneers made them work for every point.

Friday the 'Beeters welcomed an improved Hays/Lodge Pole Thunderbird team to town. Hays/L.P. got a late start to the season but were still a team to be taken seriously. Chinook won the opening set 25-14 and then took the second set 25-12. The 'Beeters closed out the Thunderbirds with a 25-16 third set win.

Neibauer paced the 'Beeter offense with nine Kills while Berreth set the hitters up with 15 Assists. Senior Allison Powell contributed seven Kills of her own and Richman added a dozen Assists.

The Sugarbeeters were in Fort Benton Saturday for the Longhorn's Mid-season Tournament. It's a good opportunity for teams to take a step back, evaluate where they're at and see some competition they may not have seen before.

The 'Beeters were in a Pool with the Fort Benton Longhorns, Simms Tigers, Plentywood Wildcats and Roy/Winifred Outlaws.

They began the day with a match against a very strong Plentywood Wildcat team. The 'Beeters struggled getting any momentum against the Wildcats and fell 21-10, 21-14 in their opening match. 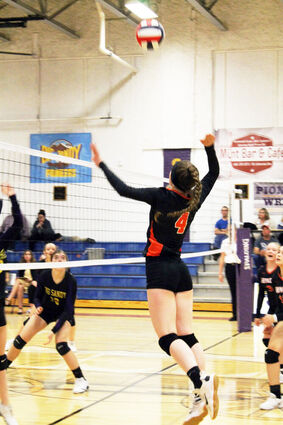 Match number two pitted the 'Beeters against the Outlaws in a very close, back and forth contest. Roy/Winifred had the final say in a tight 22-20 first set win over the 'Beeters. Set number two was nearly identical with the Outlaws edging Chinook 21-19.

Match number three saw the 'Beeters take on a familiar foe in the Fort Benton Longhorns. Chinook dropped the first set 21-19 and took the second 21-10. In the final match of the day the Sugarbeeters and the Simms Tigers battled in a thriller. Chinook won the first set 24-22, dropped set number two 21-12 and fell in a nail-biter 13-12 in set number three.