'Beeters Even Season Series With Fort Benton, Knock off Longhorns 3-1 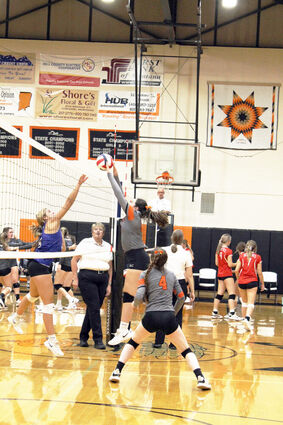 Junior Lexi Pitkanen had a great match in Fort Benton recording a team high four blocks in the win.

The Chinook Sugarbeeter volleyball team had a bit of a hiccup in mid September, but have been on a roll since then. The 'Beeters have strung together five straight conference wins to build some momentum. With just a couple weeks remaining in the regular season, the girls would have an opportunity to address that hiccup.

This past Friday the Sugarbeeters were in Fort Benton to take on the Longhorns. In the first match back in September the 'Beeters won the opening set before dropping the next three in a 3-1 loss to the Longhorns. The 'Beeters turned the tides in match number two winning. Like the first meeting the 'Beeters took the opening set 25-23, this time they also won set number two 25-13 to take a 2-0 lead and went on to win the fourth set 25-18 and the match 3-1.

In the opening set it was important for the 'Beeters to gain the advantage early. The two teams have been in some outstanding matches through the years and Friday night was looking like another one of those nights. The teams exchanged serves and played extended volleys, but neither team could seem to get the upper hand on the other. Like the first outing, it was the Sugarbeeters that had the final say in set number one, winning a thriller 25-23.

Looking to avoid a repeat the 'Beeters came out firing in set number two. The girls were aggressive at the net and solid in the back row. The team passed the ball well giving the Setters a great opportunity to provide the hitters with good sets. The 'Beeter attack continued to swing hard and helped the girls earn a 25-3 win in set number two.

The Longhorns are a veteran team and the Sugarbeeters were prepared for their best effort in set number three to avoid the sweep. Chinook had plenty of opportunities, but so did the Longhorns to separate a bit on the scoreboard. In the end the teams matched each other point for point until the very end when Fort Benton was able to earn the hard fought 25-23 set win to cut the 'Beeter lead to 2-1.

Looking to get the job done in set number four the 'Beeters came out firing. The back row was very active in keeping rallies alive, digging up ball after ball. The offense generated a whopping 44 attacks in what would be the final set of the match. Chinook slammed home 10 Kills as a team and continued to hit at a high percentage in earning a 25-18 set win to close out the Longhorns three sets to one.

The Sugarbeeters were led on the night by the tremendous effort of Neibauer at the net. The sophomore standout slammed home 18 of the teams 39 Kills in the win. Senior Shay Hauer and sophomore Mya Berreth each served seven Aces for the 'Beeters. Junior Lexi Pitkanen was a stopper at the net, leading the team with four blocks on the night. Senior Tylie Richman set the hitters up with 15 Assists. Junior Bree Swanson dug up 17 balls to lead the 'Beeter defense. 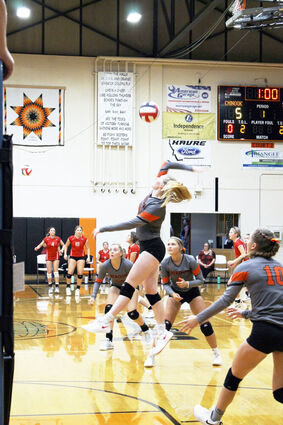 Chinook sophomore Hallie Neibauer was a force Friday night in the 'Beeters huge 3-1 win over the Longhorns. Neibauer slammed home a game high 18 kills in the win for the 'Beeters.

The battle for seeding in the District 7C Tournament heating up with the order of the top four spots still up in the air. No clear cut favorite has emerged. The Geraldine/Highwood Rivals are undefeated in conference play, but have been tested. The Sugarbeeters lost in five back in September, This Friday in Chinook the girls will have an opportunity to even the season series. Chinook will be in Box Elder on Thursday to take on the winless Bears.

Currently the Rivals hold the top spot in the District 7C standings with 13-0 record. The Longhorns sit in second at 11-2 while the Sugarbeeters are currently third at 9-3. Both the North Star Knights and Chester/Joplin-Inverness Hawks sit at 6-5. While the Rivals may be undefeated, the 'Beeters, Hawks, Knights and Longhorns have all taken sets from them, leaving the door open. Big Sandy is sixth at 4-8, Centerville follows at 4-9. Hays/Lodge Pole is 1-10 and Box Elder is yet to win at 0-11.

The District 7C Tournament is set for October 28-31 in Chinook with the top four teams advancing to the Northern C Divisional in Fort Benton, November 4-6.