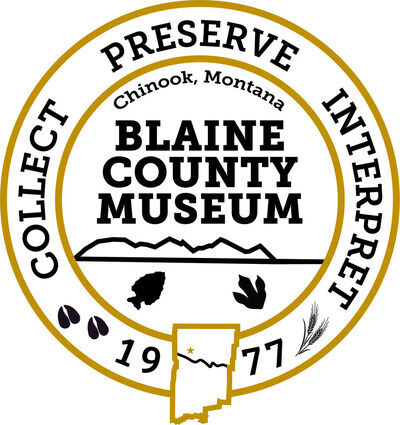 "Ask and you shall receive" seems to be an appropriate moral of the Blaine County Museum's story as they searched for replacements to the board after the loss of Jeannie Powell-who passed away in May-and Wally Elliot, who resigned in July. Museum Director Samantha French's appeal to the community has resulted in two new voluntary board members: Cassie Johnson and Greg Jergeson.

A full-time agent representing Lodestar Land and Home, Johnson identifies real estate as her calling. And with her office located in Chinook's once upon a time bank and opera house-now the Treasure State Title Building-she seemed destined for a role with history.

"I have always had a love for history and museums as my dad drug us to every museum he could when my brother and I were growing up! We watched documentaries every night, and some of my favorite memories of him were riding horses through the Missouri Breaks, hearing all of the knowledge he had of this land we call home."

Johnson considers a position with the Blaine County Museum Board a great opportunity for her. She looks forward to "being more involved with local history and promoting this special place with such rich history!" To her position, she brings not only her six years of service to the Bear Paw Roundup Board but also her experiences acquired while growing up on a ranch south of Chinook on Lone Tree Bench and traveling between there and Independence, Iowa, where she attended high school.

After graduation, she went to college on a full-ride rodeo scholarship in Fort Scott, Kansas, and then on to Southwestern Oklahoma State University to finish her bachelor's degree in kinesiology. Johnson explained: "I always knew this part of Montana would be home to me forever, so at the first opportunity, I promptly loaded my fur family and headed north."

"Serving on the Bear Paw Roundup Board, I have loved getting to know more people in the community and discovering ways to raise money for the fair and rodeo. I am ready for a change of pace and a new opportunity to help another organization and meet more wonderful people of this great community I call home," Johnson exclaimed.

The second member, Jergeson is a lifelong resident of Blaine County. He also grew up on a farm south of Chinook, attended grade school at the Miewald School, and graduated from Chinook High School in 1969.

After high school, Jergeson enrolled at the University of Montana-Missoula (UM), where he earned a Bachelor of Arts Degree in Political Science with a minor in History. While a student at UM, he served as a legislative intern during the 1973 legislative session. Here, he watched long-time family friend, Representative Francis Bardanouve as he went about his historic work on behalf of Blaine County and the State of Montana.

"During his remarkable 36 years of service in the Montana House of Representatives, Francis Bardanouve succeeded, among other accomplishments, in securing State support for the amazing depiction of the Battle of the Bear Paw, housed in the Blaine County Museum. In 1975, during my first 24 years in the Montana Senate, I had the privilege of working alongside Francis on behalf of

Blaine County, for that and several more legislative sessions," Jergeson wrote in his letter of interest to the Blaine County Museum Board.

After serving in the State Senate from 1975 to 1981 and again from 1987 to 2003, Jergeson added two terms on the Montana Public Service Commission (PSC) to his public service record. In his last six years with the PSC, he functioned in the role of chairman.

Describing himself as "a lifelong student of history," Jergeson looks forward to his role on the Museum Board, saying: "I would very much like to work with all of you in recording and preserving the enormous historical legacy of Blaine County and its residents."

French is pleased with her new recruits, commenting: "Cassie is a young business woman with a fresh perspective, and Greg has multiple connections given his past experience with state, county, and city governments. Both of these individuals with their diverse perspectives will be assets to the Museum Board."