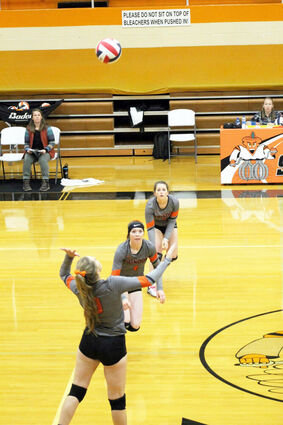 The Chinook Sugarbeeters recognized their seniors Friday night prior to their match with the Geraldine/Highwood Rivals. Senior Allison Powell looks to score a Kill for the 'Beeters against the Rivals.

The Chinook Sugarbeeter Volleyball team has been playing very well the past couple of week and were looking to solidify the post-season positioning. This past Thursday the girls were in Box Elder where the swept the Bears easily by scores of 25-5, 25-6, 25-7. Friday night the 'Beeters honored their seniors before their contest with the undefeated Geraldine/Highwood Rivals. Like their first meeting between the teams, the 'Beeters took the Rivals the distance before falling in five sets, 25-22, 23-25, 25-16, 20-25, 11-15.

The 'Beeters were in Box Elder Thursday night looking for the season sweep of the winless Bears and wasted little time in getting the job done. Chinook stormed out to a big lead in each set and never looked back. The win helped solidify the 'Beeters No. 3 position in the District 7C as they improved to 10-3 on the season.

Friday night the 'Beeters were at home to take on the top seeded and undefeated Geraldine/Highwood Rivals (14-0). Prior to the match, the team honored their three seniors, Allison Powell, Tylie Richman and Shay Hauer.

The 'Beeters took the Rivals to five sets in the first meeting in Geraldine back in September and were determined to turn in another solid performance in front of the hometown crowd on Senior Night.

Junior Bree Swanson gave the 'Beeters an early 7-6 lead in the first set with a nice play at the net. Moments later sophomore Hallie Neibauer found the corner for a beautiful Kill and a 14-12 Chinook advantage. The Rivals would battle back and take an 21-18 lead.

Following a 'Beeter timeout the 'Beeters caught fire. Senior Shay Hauer scored a Kill, the Rivals were in the net and senior Tylie Richman served an Ace to even the score at 21-21.

Senior Allison Powell and Swanson combined for a nice block and a 22-21 'Beeter lead. Chinook would score the final three points to win the set 25-22 the last coming off a stuff block by Neibauer

In set number two the Rivals turned the tables and eked out a hard fought 25-23 set win to even the match at a set apiece.

The 'Beeters looked to regain momentum in set number three. The teams matched each other point for point early on and were tied 8-8. The Rivals took a 13-9 lead following a timeout.

The 'Beeters responded with a huge Kill by Swanson and a stuff block and an Ace by junior Anna Terry to even the set at 13-13. Swanson added another kill, The Rivals couldn't handle an attack by senior Allison Powell and Swanson slammed home another point for a 17-14 'Beeter lead.

Following a Rival timeout Richman served up a pair of Aces to extend the advantage to 20-14. Swanson served an Ace for a 22-16 Chinook advantage. The Rivals hit the ball long and Powell found the back line for Kill. The final point of a 25-16 third set 'Beeter win came off a Rival hitting error.

The 'Beeters got off to a slow start in set number four and never managed to get anything rolling against the Rivals. Geraldine/Highwood was consistent in their attack taking the set 25-20 to even the match at 2-2.

In the deciding set it was the Rivals that carried the momentum through to the end, clipping the 'Beeters 15-11 to win the match 3-2. It was a well played match for both teams. Chinook has shown the ability to match the Rivals on the court and anything can happen come tournament time. 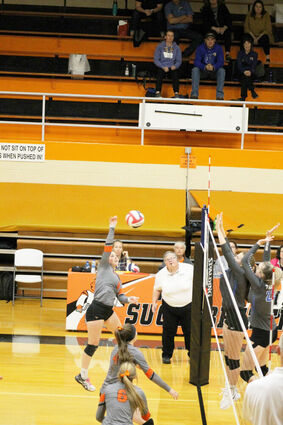 The Sugarbeeters were led on the night by Swanson who slammed home 13 of the teams 32 Kills in the match. Swanson also served up four Aces to lead the team along with Elliot. Neibauer was a force at the net, garnering seven of the teams 15 Blocks. Berreth set the hitters up with a team high 11 Assists on the night.

The Sugarbeeters welcomed the Chester/Joplin-Inverness Hawks to town on Tuesday, full story and results in next weeks paper. Chinook concluded their regular season today, Wednesday, October 20, in Hays against the Thunderbirds. Going into Tuesdays contest the 'Beeters (10-4) had a one game lead over the Hawks (9-5). The Hawks won the first meeting between the teams, so a Chester win would give Chester/J-I the No. 3 Seed in the District 7C Tournament. A 'Beeter win would lock up the No. 3 Seed for Chinook.