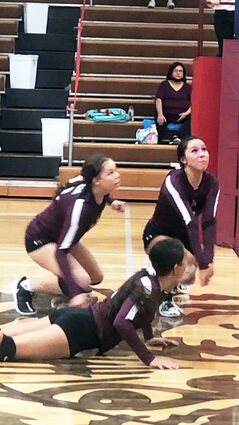 Senior Jessica King keeps the ball alive Saturday against Wolf Point. The girls played well, but lost in a grueling five set thriller. Harlem will host Rocky Boy Thursday and will recognize their seniors prior to the start of the Varsity match.

The Lady Cats got the best of the Wolves back in September, winning on the road 3-1. The second go around didn't produce the same results, but despite the loss, the girls played well.

The Wildcats and Wolves matched each other point for point in a very even opening set. Neither team was able to really gain the upper hand on the other but in the end the Lady Cats took a back and forth first set 25-23 to gain an early advantage.

Wolf Point responded in a big way in set number two. The Wolves jumped out to an early lead and never looked back in a 25-15 set win to even the match at 1-1.

Harlem regrouped in set number three and again found themselves in a point for point battle. Like the first set it was the Lady Cats putting the final point on the board to win set three 25-22.

Wolf Point had their backs against the wall in set number four but the visitors were up to the challenge. Jumping out to a fast start the Wolves took set number four 25-17 to force a fifth set.

This time around the tightly contested set went the way of the Wolves 15-12 dealing the Lady Cats a tough 3-2 loss as the teams split their regular season matches with each winning on the opponents court.

"Overall I was happy with the way we played," stated Head Coach Kim Faulkinberry. "We had some players out on quarantine, so some younger players stepped up and really helped us. We were right in the match all the way through the fifth set."

Faulkinberry added that the numbers show how close they were, "Looking at our statistics, we were almost even straight across the board. The only area they led in was Wolf Point had 3 more kills than we did so their attack percentage was just a bit better."

Senior Chloe Messerly once again led the Lady Cat attack powering down a team high nine Kills on the night. Senior Taya Trottier added seven and junior Mylah Rider contributed six. Trottier and sophomore Kaitlyn Johnson each served up a trio of Aces. Senior Jessica King dug up 18 balls for the Lady Cats while Johnson picked up 16. King also led the team in Assists with 16.

Harlem (5-8) will look to close out the season on high note. Thursday they will recognize their seniors prior to their contest with the Rocky Boy Morning Stars. Their final regular season match will be at home Saturday against the Poplar Indians.

The team will then turn its attention to the District 2B Tournament in Wolf Point October 29-30.