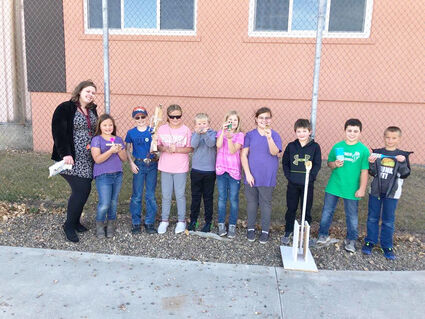 The Third and Fourth grade classes in Turner found out what it was like to become an engineer this past week in their Science Class. They were instructed to build a marshmallow launcher and earlier in the week, they got the chance to launch a marshmallow. The sky was the limit to what they could use and how they engineered it but they also needed to go back to the drawing board and decide how their launcher could be improved, which is part of being an engineer. This was a fun and effective classroom project. Shown are the students and teacher of the third and fourth grade class. They are left to right: Miss Tatyana Vukcevic, Harley Beck, Colt Leitner, Mary Simons, Rhett Ammen, Gracie Zellmer, Juliann Hawley, Auzdyn King, Lucas Grabofsky, and Cooper Grabofsky. Absent was Alaina Egbert.