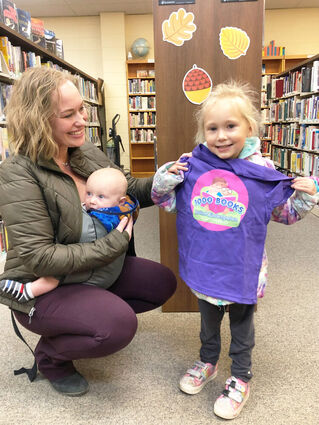 Beside her mother, Michelle and brother, Andrew, Josey Sather proudly displays the shirt she won by reaching a reading milestone.

Partners in the 1000 Books Before Kindergarten literacy program since January of this year, Harlem Public Library staff are proud to announce an award-winning reader. Josey Sather, the daughter of Michelle and Chris Sather, has reached a major milestone in her reading career.

Along with her parents and grandparents, Josey has read over 500 books since participating in the Harlem Library's 1000 Books Before Kindergarten program. For reaching her halfway mark, Josey received a shirt with the 1000 Books logo printed on it by The Clothing Company of Harlem.

According to Assistant Librarian...