Blaine County Beacon: Getting Real with His Writing 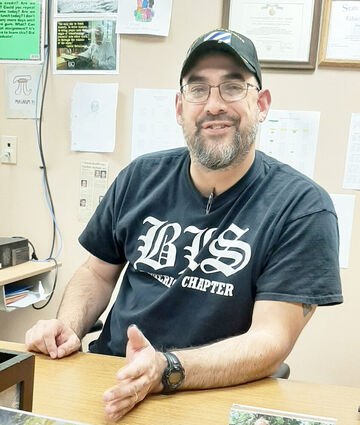 From 1995-1999, author Jack G. Young served in the US Army as a crewmember of an M1A1 Abrams tank. During those years, he forged a bond with many other soldiers with whom he is still in contact today. He later went on to receive his Bachelor of Science Degree in Secondary Education in 2005 from Montana State University-Northern and became a high school history teacher at Harlem High School. Now in his 16th year of teaching, he has added four self-published novels to his list of accomplishments: Down Range, The Wolf, Final Target, and Nolan. To write those books, he has drawn largely from his own life.

Young taught junior high social studies his first two years in Harlem, and following the passing of his mentor Matt Siemens soon after the 2008 school year concluded, Young moved over to the high school and has taught there ever since.

An avid reader, as well as a film and music aficionado, Young began writing "hard core" seven years ago. In his own estimation, his early books were not very good, but he continued to practice, honing his craft. Like all writers, he occasionally experiences writer's block but pushes through because he has a goal and adheres to a ritual. Down Range, a private investigator mystery/ thriller, was the first book that survived both the first and second drafts.

Serious as an author, Young commits to composing 1000 words a day. Making writing part of his daily ritual, he rises early, showers, brews a pot of coffee, and typically writes from 4:30 until 6:30 a.m. when it's time to roust his two children from bed.

Although he confessed that he doesn't often write when he travels, he avoids inventing excuses to skip his writing ritual. "If I don't make the writing a routine with consistent 'practice sessions,' I lose my motivation. Writing is my passion, and I want to do it all the time. The best recipe for any author is to read and write a lot."

All writers have their procedures and processes, and for Young, that means filling six-eight pages in a 7.5" x 9.75" composition notebook every day. Once he has a story arc and knows how the book will end, he writes short biographies for his characters and constructs a quick map. Drafting with the end in mind so that he knows where he's going, Young writes his books out long hand-just putting the ideas down on paper. Later when he types the manuscript, he revises-rearranging and refining his writing. Sometimes he will rehearse the story, reading it out loud and wondering if the dialogue or a character's word choice resonates as realistic or simply "sounds right." In Ernest Hemingway fashion, he wrote his last book, standing up.

Sometimes, whatever he's reading at the time will influence his work. For example, he was reading an Elmer Leonard book when he was writing Final Target, so that informed the writing much like research. "Final Target is a crime thriller that takes on the feel of a Tarantino film," Young explained.

Another literary icon that Young esteems is author Stephen King. Young has read multiple books by King from The Stand to On Writing: A Memoir of the Craft. He tells a story about being in Missoula for a Stephen and Owen King book event and his "star-struck" reaction to siting the author in a motel. He also recalls that the indie bookstore that put on the event sent those who had obtained tickets an email address to pose a question that may or may not be asked during the event. Young's was selected: "How do you get teenagers interested in reading and writing?"

King's response was profound in its simplicity: "Intrigue them with their interests."

Creative people inspire Young. In the minds of both Young and King, "Writing is refined thinking." Both authors make an effort to tell stories about what people actually think and do. Young describes the process by saying, "When I write, I get real."

Young's books-which for the most part belong to the crime thriller genre-highlight moments that have shaped him as a person. Readers of Down Range who also know Young will notice the similarities between the author and his protagonist, Mike Wells. Both have a past as a gunner in a tank; both teach history at a high school, both have two children, and both maintain ties with Army buddies. They also acknowledge the brotherhood that forms after spending hours on end living on a tank with fellow soldiers.

"Yes, that book was inspired by autobiographical detail. I shot a good gunnery my first time out like Mike did, and I also like corn on my sloppy joes," Young confirmed.

When asked to consider the most challenging aspect of writing, Young named self-promotion and the persistence of trying to get an agent. "When you struggle to get published, that may indicate nothing about your talent or ability. It's about timing and the market's readiness for a type of book," he said.

Currently a user of CreateSpace, an Independent Publishing Platform, Young's goal is to not be self-published. CreateSpace is a Scotts Valley, California, based company that provides online services for prospective book authors, music artists, and movie makers to self-publish their work. He learned about CreateSpace towards the end of the 2018 school year after reading a Facebook post by a classmate who had self-published a novel. He has used CreateSpace since then, and his book covers are designed by an Italian woman living in Germany. Rather than continue with this Amazon company, Young plans to push the traditional route with his next book.

As he waits for a break through discovery, Young is earning a little bit of money on the sales of his four novels. Without jinxing his book in process, Young describes his latest work: "It's another crime-like book set in Wilson, Montana. All of my books are stand-alone books with some overlap in characters." 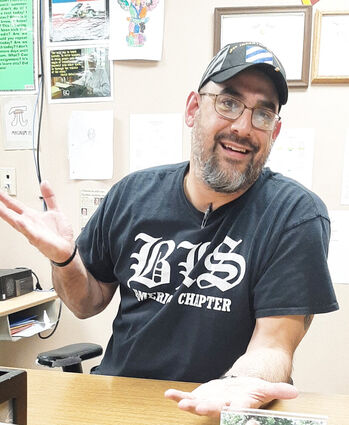 The setting, Wilson is a creation of Young's imagination. The locale takes on parts of Havre, Harlem, Billings, and Colstrip. Young claims that a fictional setting gives him the freedom to tinker and put things where he wants without having to be concerned about a reader knowing a place better than he does.

On Sunday morning, October 17, Young found his writing zone and reported having written 7 ½ pages. As a way of explanation, he said, "I have these characters getting themselves into certain situations, and I want to see what happens to them."

Anyone interested in reading Young's books can find them at both Harlem Public Library and the Blaine County Library in Chinook. They are also for sale in Harlem at Schmuker's Pizza, in Havre at the Atrium, as well as on Amazon.