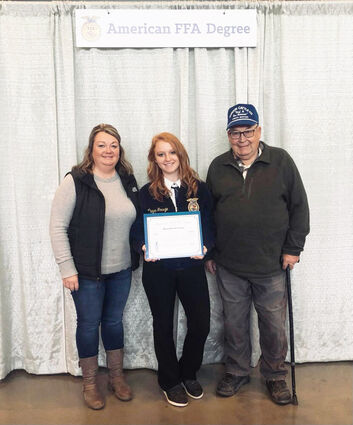 On October 30 in Indianapolis, Alyssa Gruszie received her American FFA Degree, representing the third generation in her family to do so. She is pictured with her mother, Trisha Gruszie, and her grandfather, Henry Gordon.

At the 94th National FFA Convention & Expo in Indianapolis, Indiana, Alyssa Gruszie accepted her American Degree in a ceremony on October 30. Her accomplishment represents a hat trick as she represents the third generation in her family to obtain 'gold standard' status with the FFA.