Lady Cats Headed to Northern B Divisional, Open with Choteau Thursday at 10 a.m. 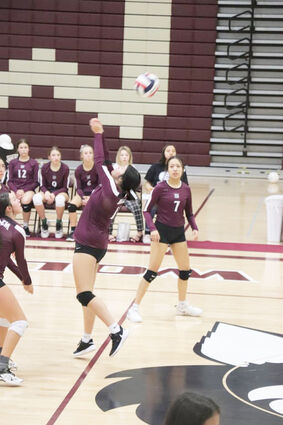 Senior Chloe Messerly broke the Harlem School single season Kills record. She now has 162 and will certainly add to it at the Northern B Divisional tournament this week.

The Lady Cats were in Wolf Point this past Friday for the District 2B Tournament. Harlem began the day with a 3-1 loss to Malta. The Lady Cats bounced back in the afternoon to sweep the Poplar Indians 3-0 before being eliminated in a tough 3-2 loss to the Wolf Point Wolves. The Lady Cats advanced to the Northern B Divisional in Glasgow this Thursday, Friday and Saturday following their fourth place finish at the District 2B Tournament.

In their opening match with the M-ettes, Harlem was looking to make a statement and in the first set they did just that with a 25-21 win. The Lady Cats were able to get a few points ahead early on and maintained the advantage to secure the opening set win. The tables were turned in set number two as a fired up M-ette team put together some runs as they evened the match 1-1 with a 25-21 win of their own.

With the match all square, the M-ettes carried momentum into sets three and four following their second set win. Malta jumped out to an early lead in set three and never looked back in a 25-15 set win to go up 2-1. The M-ettes used the same formula in winning the match 3-1 with a 25-16 fourth set win.

Senior Chloe Messerly led the Harlem attack, serving up seven Aces in the match while also slamming home eight Kills and recording a block at the net. Senior Vanice Little set the hitters up with 10 Assists. "We statistically, played our best match of the day against Malta," stated Head Coach Kim Faulkinberry.

The loss sent the Lady Cats into a Loser Out match with the No. 5 Seeded Poplar Indians. Harlem has dominated the Indians in two previous matches and Friday at the District 2B it was more of the same.

"The Poplar match slowed us down quite a bit and we could find our rhythm against the slower paced Poplar team," added Faulkinberry. Messerly again led the attack with six Kills and three Blocks.

The Lady Cats then turned their attention to the Wolf Point Wolves, a team they split their regular season matches with. The winner would get the No. 3 Seed while the loser would be the No. 4. "Going into the Wolf Point match I told the girls to not just be satisfied for taking fourth and qualifying for the divisional tournament," stated Faulkinberry.

Harlem started the match with a flurry swinging hard and finding open spots in the Wolf Point defense. The Lady Cats took an early lead, built on it and cruised to a 25-24 first set win. The Wolves had an answer for the Lady Cats in set number two winning 25-15 in nearly identical fashion.

The teams matched each other point for point in set number three playing a back and forth match. With fans hanging on every point it was Harlem that scored last in a hard fought 25-23 third set win to go up 2-1.

The Wolves, playing on their home court were able to retake the momentum in set number four, evening the match at 2-2 with a 25-22 set win. In the fifth and deciding set, Wolf Point raced out to an early lead and secured a 15-9 win clinching the match 3-2 and the District 2B No. 3 Seed at the Divisional Tournament.

Faulkinberry commented on her teams final match of the tournament, "I know it was a long day but we had more errors in this match than any of the previous matches. We had so many amazing plays, but would shoot ourselves in the foot with passing errors, service errors, and hitting errors. Credit goes to Wolf Point, they did a good job putting pressure on us."

Faulkinberry pointed out a couple of milestones two of her players reached, "Chloe Messerly did break our season kill record of 162 held by Aspen Baker. Chloe will add to her total next week at Divisionals!!! We also have a career dig record that fell. Junior Jessica King, has surpassed Leandra Thomas's 2007 career record of 468 this season so far with 490. She will have next week and next season to increase that total."