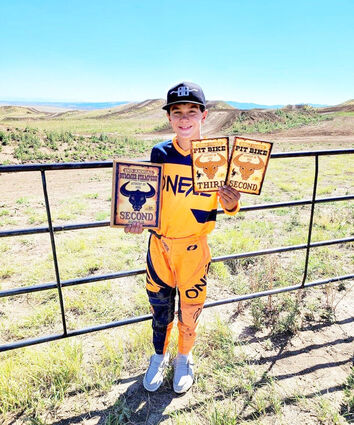 On October 13, Jason Weiss, Founder of FLY Racing, posted the roster of 2022 Team Bar Bangers. On that roster is Ryder Hofeldt, the twelve-year-old son of Levi and Tara Hofeldt. He will be riding for the only FLY Racing-sponsored youth program in the nation.

The youngest in a group of sixteen youth ranging from ages 12-17, Hofeldt qualified and was accepted to compete in the 2022 Motocross Season. When he heard the announcement, he said: "I'm officially a member of Team Bar Bangers! I can't wait to suit up in my FLY Racing gear and do what I love while helping others and representing my community."

Established in 1998, FLY Racing is one of the fastest growing off road motorcycle riding apparel and hard part brands in the power sports industry. They also develop quality products for the competitive North American market. The team name, Bar Bangers, comes from racing against other riders and hitting the ends of their handlebars in a pass.

Sporting FLY Racing apparel, Hofeldt will ride with seven other Montanans, as well as teammates from Washington, Idaho, and Florida. While wearing #770, Hofeldt will put his orange 2022 KTM 85sx 2 stroke motorcycle through the paces on the track. Motocross is a racing sport where participants ride motorcycles over rough terrain. Regulation courses are one to three miles long and feature different obstacles for riders to navigate. Because no two courses are alike, motocross is often more demanding than other racing sports.

Hofeldt confesses that "it's fast and scary out there with 25 bikes roaring behind me." He described sailing over hills and catching air. While racing, he has to remind himself not to look back but to keep forward momentum. "I can't even hear my own engine because of the roar!"

His mother explained: "Motocross is a big sport, and not just in our area. Although motocross isn't a 'typical sport,' Ryder works harder than most adults I know and stays committed to all that he loves. He's not a 'rebel with a dirt bike'; he's a thoughtful and caring young man."

Sometimes teased for his love of dirt bikes, Hofeldt received his first trail bike-a Honda 50-as a gift on his fifth birthday. He used that bike to trail and move cows. Now he has upgraded to a green 110 Kawasaki to do his farming and ranching chores-something else he claims to enjoy.

Hofeldt may come naturally by his interest in bikes. His father rode dirt bikes and hill climbed through high school and his young adult years. To somewhat follow in his father's tracks, Hofeldt started racing competitively in May 2021 with his younger brother, Rhett. After he came across his first two-stroke race bike, he was hooked!

"Two stroke bikes are a little faster than those with four stroke engines," Hofeldt proclaimed.

Maybe, a little too fast. In July 2021, Hofeldt experienced his first 'serious' wreck, dislocating his shoulder at the High County Motocross Association (HCMA) race in Helena. He refers to the accident as "proof that he's a real rider."

When it comes to racing, Hofeldt's mom describes her oldest son as energetic and committed. "He's always chatty, always the one up at the starting gates visiting. He takes what he loves and he becomes hyper-focused, and racing has definitely been an outlet for his energy. He's devoted; he does all of his own washing, prepping, and trailer loading. He takes care of his brother's bike, and he's always trying to meet friends at the track. With that being said, he's also very timid. There are weekends where I can tell he's intimidated and nervous as heck, but he puts his helmet on and pushes through. He's really a great kid, with a ton of passion."

That caring nature follows Hofeldt into his daily life. "Besides loving animals and pets, he's always taking care of our elderly neighbors. I think he's an old man in a young man's body," his mother declared.

When asked what it's like to be a "moto mom," Hofeldt's mother responded: "It's a bit daunting. It's also overwhelming, frustrating, dirty, and hot. I've had to learn to do things I never thought I'd need to, for sure, but it has also provided some very good friendships, not only for us, but for our kids.

"On some weekends, I've had to go alone because hay needs to be cut, or maybe it's a branding weekend or harvest that demands Levi's time. It's difficult for Levi when he can't join us because he wants to be there. He calls several times during the day to check and see how the boys are performing. I'll video and send him clips, but it's not the same, and I know it's hard on him.

"Yet, there isn't a single person on the track who wouldn't help. It's a family, really, motocross. Everyone wants everyone's kids to excel, even when they're on the gates together. Many times I've shown up and had someone else make me get out of the car so they can back my trailer in straight or help unload bikes, fuel up, fix levers, and straighten handlebars after a wreck.

"It's rewarding really, because while I was intimidated at first, it has become a fun environment for all of us, and we look forward to each weekend. Even when we go solo, Levi makes sure filters are washed and oiled, makes sure I have the right fuel and oil to mix and a bundle of spare parts. I have a long list of things still to learn, but I'm certainly encouraged by those who have stepped up to help and those who have supported the kids this past season."

The Hofeldt boys have raced in two series this year in the state, Central Montana Motocross and HCMA. In order to earn state points and to maintain a competitive edge, a racer has to race often. The boys' commitment has paid off, as both are ranked fifth in the state due to their weekend points. 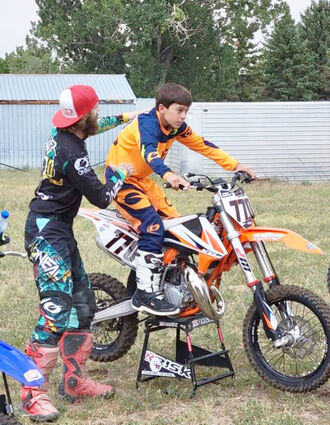 At a training session, professional rider Jesse Karr gives Ryder Hofeldt both suggestions and encouragement to rev up his game.

Hofeldt's goals for the 2022 season are to get faster and to make progress towards becoming a motocross champion someday. With continued training and his accomplishments to date, that looks to be an achievable goal. Hofeldt has trained with motocross professionals Jesse Karr and Thomas Richards from Montana and Tim Ferry of Florida.

When he's not racing, Hofeldt is a drummer in the Chinook High School pep band. He describes his brother Rhett as a "football kid with an arm on him."

Upon releasing the list of Team Bar Bangers, Weiss congratulated his team and thanked their sponsors by saying: "You ALL showed the above and beyond passion necessary to be on this team and will be rewarded accordingly! Thank you to all our 2022 corporate and private sponsors who make this program successful! You are the backbone to these youth believing in themselves! Tina Weis and I will work our hardest to ensure a successful 2022 Bar Banger season!"